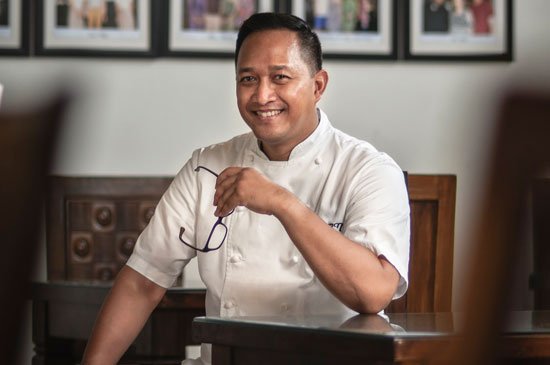 Phuket, Thailand – 23 February 2016: Degan Septoadji, better known as Chef Degan, brings a passion for cuisine and a refined style to Phuket, with traditional Indonesian dishes mastered with an abundant mix of exciting ingredients and flavours. From the 4 th until the 11th of March 2016 the JW Marriott Phuket Resort & Spa will open its doors of Ginja Taste, the resort’s signature Thai restaurant, and allow the Master Chef to take over with a mouth-watering mix of Indonesian fare.

The respected judge on the reality show, Master Chef Indonesia, and his home team of sous chefs will be working alongside our in house culinary artists to present a unique a-la-carte menu at Ginja Taste that will introduce diners to the colourful world of Chef Degan’s Indonesian offerings.

On the 11th of March, Chef Degan’s last day during his visit to the JW Marriott, he will be hosting a limited-space cooking class to work hands-on with guests at the resort, teaching them some of his signature dishes, presenting the perfect opportunity to take part of their memorable experience in Phuket home. As limited spaces are available in the popular Ginja Cook, advanced bookings are highly recommended to those who would like the opportunity to learn 7 dishes and the foundation pastes behind many Indonesian dishes from a true Master Chef.

After graduating from Berufsbildende Schule Technik II, and armed with the techniques to create classic European dishes and sauces, Degan set off into the wider culinary world, quickly working his way up to executive sous chef at Bali’s Grand Hyatt. With his reputation growing in the industry, Chef Degan was given the opportunity to work at some of the world’s premier fine dining and luxury establishments, including the Ritz-Carlton and and other world-renowned brands. He travelled extensively, helping to open restaurants in Australia, Tibet, Morocco, Sri Lanka, China and the Maldives.

In addition to his professional journey, Chef Degan is well known for appearing as a judge on popular reality TV show MasterChef Indonesia. His delight for Indonesian food has brought him to cook and present his food at some of the world’s best venues including the 3-Michelin star Restaurant Schwarzwaldstube in Hotel Traube Tonbach, Germany regularly since 2014. Degan was nominated as ‘Best Asian Chef’ at the 2012 World Gourmet Summit in Singapore.

Currently, apart from his involvement in Café Degan, Chef Degan is a regular guest speaker and judge in cooking competitions, television appearances, host and motivator, culinary columnist and consultant.