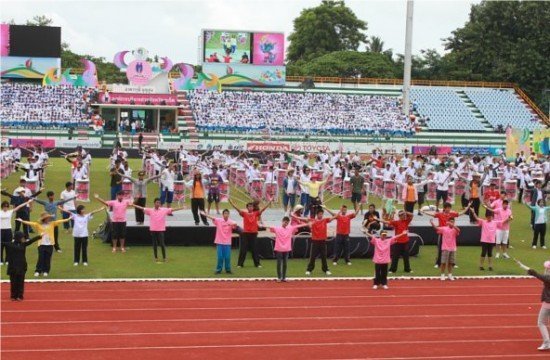 On May 24th, PPAO President Mr Paiboon Upatising, PPAO officials, and media were at Surakul Stadium to watch the rehearsal of the opening ceremony for Phuket Games 2012.

Members from all related units, schools around the island, and institutions will be participating in the opening ceremony. In order to make the opening ceremony free from errors, the rehearsal started with the stand and went through technical system for its grand performances. The opening ceremony will be held on May 26th and will feature 6 shows under the theme of “Amazing Phuket.”

Mr Paiboon said, “PPAO has been prepared and rehearsed for days now. It’s our final rehearsal today. As we’ve had meeting over the issues of traffic, parking and performances, we hope there will be no problem. As for weather, we have checked the forecast and it seems like there will be no rain. However, it won’t affect the performances if it rains.”

“So, I would like to invite Phuket residents to come to both the opening ceremony of 28th National Youth Games or Phuket Games on May 26th and closing ceremony on June 5th at 5PM-8PM at Surakul Stadium,” Mr Paiboon added.