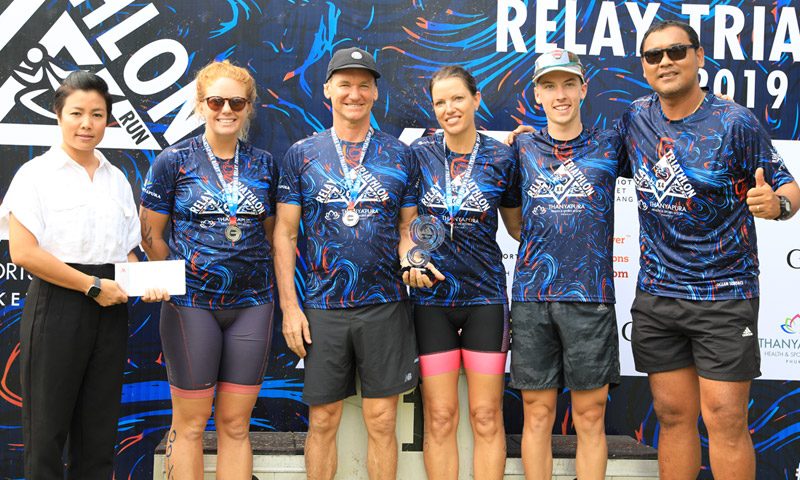 This successful sporting contest featured a series of relays for various age groups, including youth events. In total, 92 athletes took part in the Relay Triathlons, each of which comprised a 300-meter swim in Thanyapura’s Olympic-sized pool, an 8km bike ride and a 2km run through Phuket’s stunning tropical countryside.

Following official Olympic standards, each team was comprised of four athletes and each member had to complete the full race distance.
Phuket Marriott Resort and Spa, Nai Yang Beach was a main sponsor of the event and rewarded the winners with a two-night stay, including Deluxe room accommodation, daily breakfast and dinner at The Andaman Kitchen, valued at THB 23,391. The prizes were presented by Witcha Thongthammachart, Thanyapura’s Operations Director of Sport & Recreation.

Thanyapura has created a year-round calendar of popular sporting event in Phuket, all of which are supported by Phuket Marriott Resort and Spa, Nai Yang Beach. This forms part of the resort’s CSR program and Marriott’s core brand commitment, “Serve360: Doing Good In Every Direction”.

“We would like to thank Thanyapura for staging another highly successful sporting event, the Relay Triathlon. Their program of contests and competitions plays integral role in improving the health and fitness of local residents in Phuket, while also creating fun activities that bring the community together. We look forward to continuing our support and sponsorship of these events, including the Color Fun Run on 9th November,” said Panchan Noimeecharoen, Assistant Director of MarComs & PR, Phuket Marriott Resort and Spa, Nai Yang Beach.

Other sponsors of the Relay Triathlon event included Vatemon, Perskindol and Unilever.