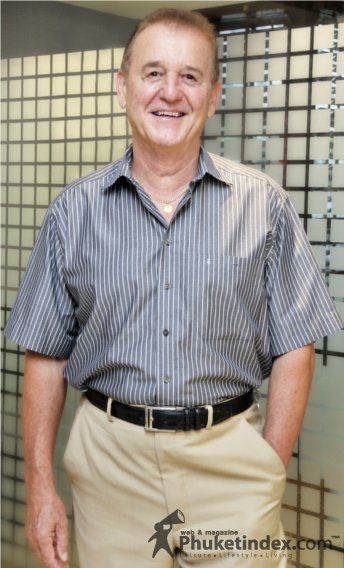 On the occasion of Dusit Thani Laguna Phuket changing hands, which was the talk of the town in the hotel industry a few months ago, when every spotlight seemed to be directed at this hotel for a while, Phuketindex could not miss the ‘train’. The following is a special interview with Peter Komposch, the hotel’s recent General Manager and the story of the Dusit Thani Laguna Phuket.

Peter Komposch, previously the General Manager of Half Moon hotel, in Rose Hall, Jamaica since 1999, replaced former General Manager Jan Verduyn who has been promoted to Managing Director of Dusit Thani LakeView Cairo in Egypt. At that time Peter brought his 27 years of experience from across the continents to lead the hotel through the domestic political turmoil and the recession of the tourism industry in Thailand.

He is a native of Austria. Peter received his Associate Degree in Culinary Arts and Hotel Administration from the Hotel and Catering School in Austria and later a Summer Certificate Program from Cornell University.

Peter, how did your career path start?

After graduating from a hotel college in my home country, I went to Canada to work for the Canadian Pacific Hotels and moved again to the Caribic where I met an American millionaire who offered me a job to become the Executive Chef on his 80 foot yacht and I sailed around the world for a year and half with his family. After coming back from this great trip, I went to Cornell University for two years.

When I finished with Cornell, I began my job for Playboy Club Hotel in Chicago as Food & Beverages Director. I moved to many places later as well as I elevated myself up along the management line. Those included Hyatt Regency in Maui, Hawaii; El Dorado Park Hotel in Vienna, Austria; Highlands Inn in Carmel, California; as Vice President and General Manager at The Princess Hotel Bermuda where I stayed for 10 years; and famous Half Moon hotel in Montego Bay where I spent 7 years before moving to Phuket, Thailand.

For you, is it important for executives, who would like to get to the top in their career, to experience the bottom line first?

Yes, I think you should get all the experience you can before becoming an executive so you know what you’re talking about. I have been in the hotel business for 30 years all over the world and the main thing I have learnt – the single most important factor – is how you deal with your employees and their performances, because this is what it takes to be a successful hotel; and also the guests should feel they are buying more than a room in the hotel for the night: they should feel they are buying a friendly, efficient and consistent product that makes them return time after time. No, because good leadership is being a disciplined professional with the drive and skills to lead and motivate the employees.

So, in your opinion, what is the most important element for your success?

Knowing the market, having a good communication between the staff and myself. Also have a high quality consistent product (value for money) and satisfy customers.

Having been in the industry for almost 30 years, what has experience taught you for the Dusit?

It’s very interesting and at the same time, challenging. You have got to have great discipline and a strong work ethic and enjoy what you are doing. I have learnt that if you approach the staff in the right way they will do their vey best for you.

We aim to continually provide uplifting experiences for guests no matter what the purpose of their journey. The resort is excellent in effective management, high-quality service, and sustainable conservation of the natural resources. In addition to its environmental-friendly operations, the Dusit Thani Laguna Phuket is a genuine, five star quality home for those in search of the perfect escape; for all people that would like to experience the promise of ‘heaven on earth’.

When you first came here in 2007, the political situation in Thailand began to heat up, but you still decided to come; why? What was your thought at that time?

I always wanted to experience the Thai people and Asian culture. At this time there are problems almost anywhere in the world. So the political situation would not stop me from coming.

During your time, you’ve seen many things happen with the hotel; can you share some with us and how about your plan for the future?

Since December 2008 Thailand has had its fair share of political problems resulting in loss of occupancy and revenue; however we managed to keep all employees in their jobs.

But despite all of this, Dusit Thani Laguna Phuket is still successful and continues to be awarded for our many “Green Globe and Green Leaf” initiatives so Phuket can be enjoyed by travelers and residents alike for years to come.

We are just in the final stages of finishing a 64 million Baht room renovation and looking forward to a good year.

As there are so many hotel properties to choose from in Laguna Phuket, each with their own character; so to get a clearer picture, what kind of different experience does Dusit Thani Laguna Phuket offer and who it has been designed for?

We have a beautiful beach, a great product and remarkable staff. That is why we get a good number of returning guests year after year. In addition, we make sure the guests enjoy the best of Dusit Thani’s exulted Thai service and hospitality. The Thai touch plus our facilities are always evident from the moment they check in, until they board the limousine back to airport. The resort is designed to attract various markets, couples, families, first time stayers to Thailand, longtime visitors to Thailand and MICE (meetings, incentives, conference and exhibitions).

We know that Laguna Resorts & Hotels sold the hotel to Dusit International PCL; will this bring any change to the hotel?

The purchase of Dusit Thani Laguna Phuket by Dusit International PLC shows a commitment by Dusit to its homeland. You should know that in recent years Dusit has expanded overseas, exporting the now world famous Thai hospitality to Dubai, Cairo and Manila.

This recent purchase of it hallmark property in the south of Thailand is a further commitment to the nation and the existing staff; and it will not bring many changes to this property. The now 23 year old resort is destined for a bright future with renewed strength.