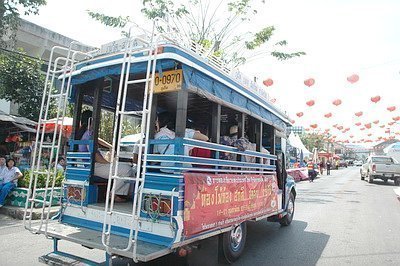 February 19th, 2010, Bangornrat Chinprayoon, the Director of Tourism Authority of Thailand, Phuket, led journalists, Thai and foreign tourist, and Phuket locals to tour around Phuket old town. The tour’s highlight was all the tour program, people who joined the tour were transported by the island’s traditional public transportation call Po Tong Car.

During the day, the Po Tong Car took people around the old town of Phuket and dropped them at meny Chinese shrine in town to let them worship and make a wish at those hily shrines. This tour program is a part of Phuket Chinese New Year and Old Town Festival held during February 19th – 21st, 2010.

The Men Who Stare at Goats in SF Jungceylon Phuket Theater