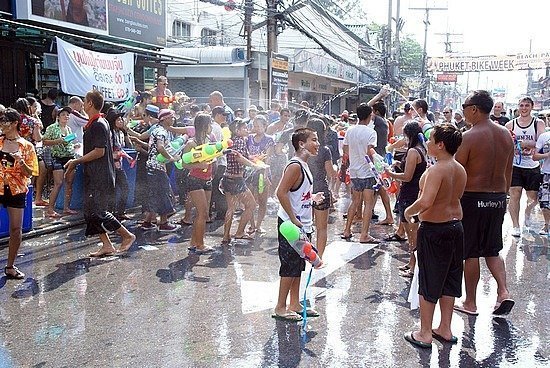 Bangornrat Shinaprayoon, director of Phuket Office of Tourism Authority of Thailand (TAT), announced, “For Songkran 2012, Patong Municipality and Phuket Office of TAT will be hosting ‘Songkran on the Beach’ at Patong beach on April 12th and 13th. There will be Cultural Performances, Songkran Parade, Water Splashing, and more.”

At the same time, there will be a merit making ceremony held by Muang Phuket Municipality. A rally, starting from Phuket-Phang Nga-Ranong, will be held on April 13th-14th. 2,555 Baht will be charged for each car.

“After the bomb blasts in Hat Yai, Songkhla, and Yala last month, no hotel reservations during Songkran have been cancelled. It’s expected 70% of tourists will be checking in and no less than 500 million Baht will be made during the Songkran period. Tourists’ visiting Phuket during this time will be made up of Thais, Australians, Koreans, Chinese, and Europeans. There might be more Europeans this year because it is at the same time as Easter holidays.”

To assure those tourists with doubts, TAT has sent out a letter to other countries clarifying Phuket is far from scenes of the recent blasts and that TAT has tightened up security within Phuket.

PPAO president to be elected