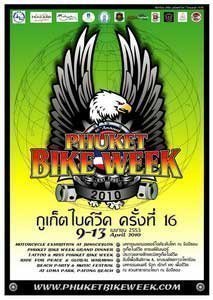 , and the club members, visited Wichai Praisa- ngob, the Governor of Phuket to discuss about a preparation of the 16th Phuket Bike Week 2010 which will be held during April 8th – 9th this year.

Nongnit,TAT representative, said that this is the 2nd year that TAT support the event by inviting international press to join the event, making tourist welcome sign. She mentioned that this year the event will be bigger and more exciting than former years. She further commented that the event helps to support Phuket tourism image and there will around 200 million baht of cash flow on the island during the event.

Addtionally, Wittaya, the Bike Club President, explained that this year, there will Phuket Big Bike Highway Patrols for the volunteers on April 8th – 9th, lots of fun activities in the area of Patong football field and there will the motorbike bike show at Jungceylon Department Store.