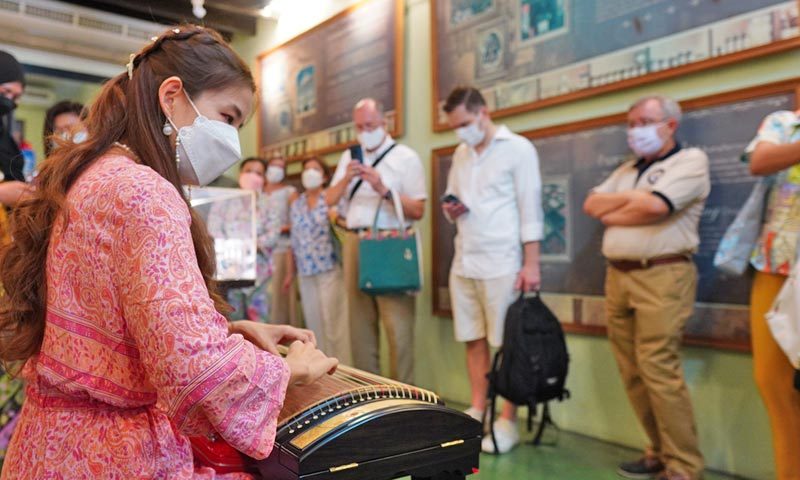 Dubbed the “Pearl of the Andaman,” Phuket attracts visitors from around the globe thanks to its azure waters, sandy beaches, and top-rated dive sites. The resort island is also blessed with local flavors and its own distinctive character as reflected in its traditional food and fashion. There’s no denying that “Phuket is a wonderful resort island with unrivalled attractions worth visiting and checking in.”

The Phuket Tourist Association in cooperation with the Tourism Authority of Thailand’s Phuket Office and the Thailand Convention and Exhibition Bureau (Public Organization) recently organized “Ambassador’s Trip to Phuket 2021,” a Phuket familiarization trip joined by members of Thailand’s diplomatic corps including ambassadors with spouses and consuls from 21 nations. The trip aimed to provide the visiting diplomats with an update on Phuket’s tourist attractions and encourage visitors from different countries to roam the resort island freely once again.

On this special occasion, Phuket Governor Mr. Narong Woonciew and his spouse, Vice Governor of Phuket Mr. Piyapong Choowong, Vice Governor of Phuket, and his wife, President of the PTA Mr. Phummikitti Ruktaengam, and the PTA’s committee members were on hand to extend a warm welcome to the visiting diplomats. Also joining the fam trip were Mrs. Siriwan Sukorndhaman, Special Expert in the Prime Minister’s Office currently on duty at the Office of the National Security Council; Deputy Director-General of the Department of Information Mr. Thanawat Sirikul and his wife; Deputy Director-General of the Department of Protocol Mr. Nattapong Lathapipat and his wife; and Ms. Mathurawee Wisuthakul, Director of Division of Economic Information, Department of International Economics Affairs.

During the tour, Onphailin delivered a welcome speech, reassuring the diplomatic group that Phuket City Municipality wants the old town to become a genuine walking street and plans development of the old town so that visitors can enjoy walking freely and safely. To achieve this, the municipality has come up with a project to develop sidewalks and take power lines underground.

Vibrant Local Culture
The diplomatic group was impressed with aspects of Phuket culture including the food and Peranakan (“Yaya Baba”) fashion that has its own cultural identity, a blend of Malay, Chinese (Hokkien) and Phuket folk culture. Phuket is known for its delicious local food such as traditional puddings, Hokkien noodles and other things that can be found at every street corner. Most importantly, Phuket folk fashion is beautiful and artistic with its own distinctive style.

Not to be missed is Phuket’s indigenous food that has been passed down through the generations. the food is so unique that Phuket was recognized as a Creative City of Gastronomy by Unesco and is on par with 18 other world cities that garnered the same honor.

The tour group also visited “Baan 63,” a tourist information center run by the Phuket City Municipality. The center welcomed the group with a Guzheng performance. Then, they visited the Phuket Thaihua Museum that chronicles the history of the first waves of Chinese immigrants from Southern China who settled in Phuket. On arrival, the diplomatic group was given a warm welcome by a group of students from Phuket Thaihua ASEAN Wittaya School who also volunteered as museum guides explaining some of the interesting facts about the exhibits on display in different exhibition rooms to the visiting guests.

Fun and Delicious Thai Food
For lunch, Master Chef Nooror Somany Steppe of the Blue Elephant Phuket held a Thai cooking demonstration in which the visitors enjoyed eating the delicious food they had cooked for themselves. It was a successful lunch that was both delicious and entertaining.

Andaman cruising
The fam trip wrapped up on an impressive note, with a relaxed sunset cruise on the Andaman Sea in a recreational junk-rigged sailboat. The cruise experience added a new perspective on marine tourism. The group later had dinner at Kan Eang @pier where they enjoyed a Thai boxing show by Tiger Muay Thai in which boxers demonstrated a wai kru ritual and traditional kicks and punches. It was an exciting spectacle in which visitors got to bone up on the history and the art of Thai martial art.

On the traveling diplomats’ trail
With the success of “Ambassador’s Trip to Phuket 2021” that aimed to provide citizens of the represented nations in the fam trip with the latest update on Phuket’s readiness to welcome international visitors, the trip organizers later shared photos and good memories from the trip on social media to inspire others to follow the trail of the visiting ambassadors under the concept “Phuket: A Wonderful Resort Island Great for Visiting and Checking in.”