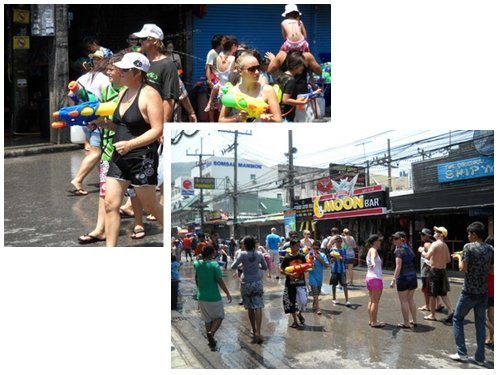 During the Songkran Festival, Phuket was crowded with both Thai and foreign tourists coming to splash water around the island, especially at the famous Patong Beach and Soi Bang La areas. People enjoyed Songkran by shooting their water-splashing guns on each other. Some of them put big water containers on the back of trucks and drove past many places on the island.

The traffic jams did not seem to upset anybody since it allowed them to splash people in the cars stuck nearby them. At Chalong Temple, one of the most famous temples in Phuket, a lot of  Thais and foreigners went to worship and ask for their fortune from the statue of a revered Abbot Luang Por Cham.

Some Thai people were from Bangkok, where political protests continue. However during the Songkran holidays in Phuket, 2 boys died and 42 people were injured by road accidents.