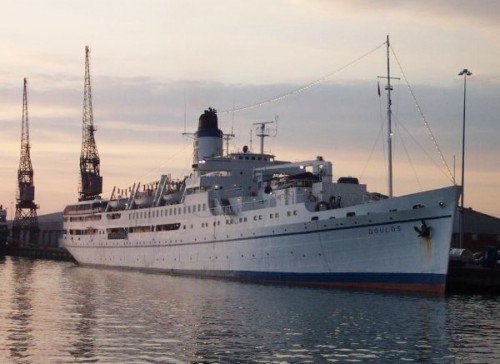 4 November 2009 – Coordinator for Public Relations of MV Doulos Konstanze Doering revealed that the world’s oldest active ocean-faring passenger ship MV Doulos will return to Phuket for its fifth visit. MV Doulos welcome everyone on board for tours, programs and visits to the floating book fair every day between November 19-27 at Ao Makham.

MV Doulos was built in 1914, 2 years after the Titanic. It is recognised in the Guinness Book of World Records as “Worlds oldest active passenger ocean-going ship.”. Doulos is a home for 330 international crews from over 50 countries. The ship has visited more than 100 countries over the past 30 years and has welcomed more than 21 million people on board including crown princes, prime ministers, presidents and many VIPs. HRH Princess Maha Chakri Sirinthorn also visited the ship when it docked at Bangkok Port (Klong Toey Port) three months ago.

This is the fifth visit for MV Doulos in Phuket. The ship was first docked at Phuket Port in 1990 and came back again in 1992, 1996 and 2006. The last visit in 2006 could attract more than 40,000 visitors. Doulos was part of the help Phuket received when we was hit by the Tsunami disaster a few years ago carrying the donations to the victims. The volunteers are mostly young people who have chosen to leave their family and friends and dedicate two years of their lives to be on board full time. They have to support themselves and work together for no salary “to bring knowledge, help and hope to all mankind”.

Doering ended the conversation with an invitation for Phuket people to visit and enjoy various programs and performances on Doulos during its stay at Ao Makham.

Phuket real estate in the eyes of Robert Krause