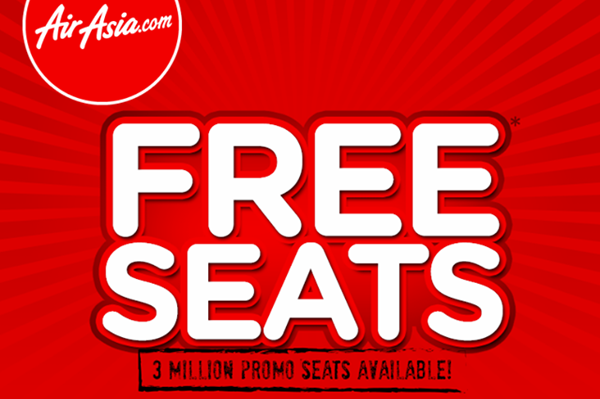 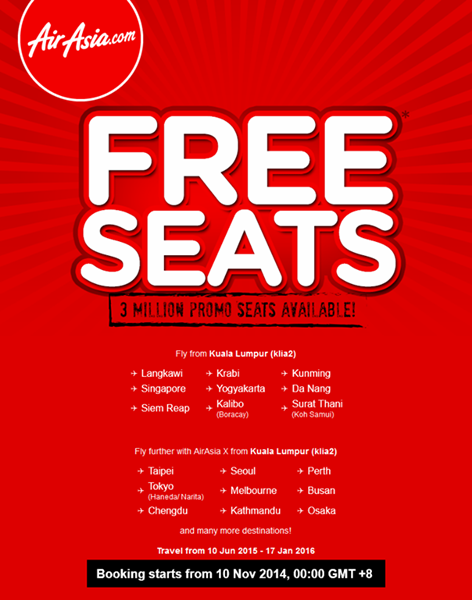 The Free Seats (excluding airport tax, fuel surcharge and other applicable fees) are available for booking at www.airasia.com from 10th until 16th November 2014, for travel during 10th June 2015 – 17th January 2016.

Mr. Tassapon Bijleveld, CEO of Thai AirAsia said, “This is a great time for our guests to plan out their holidays for next year with our Free Seats promotion for both domestic and international destinations across our network. With the addition of two new airlines, Thai AirAsia X and Indonesia AirAsia X, our guests can now go further direct from Bangkok to Seoul, Tokyo and Osaka; making this promotion even more attractive for our guests.”

Thai AirAsia X at the same time is also offering a promotional fare starting at only 4,490THB for travel from Bangkok to Seoul (Incheon) and Osaka (Kansai) (including airport tax and fuel surcharge). Low fares start from 4,690THB from Bangkok to Tokyo (Narita) with the same booking period of 10th – 16th November 2014 for travel from 10th June 2015 – 17th January 2016.

AirAsiaGo, the holiday division of the world’s best low cost airline, will also be offering special deals for travellers during this promo.
AirAsiaGo is presenting great savings up to 60% when Free Seats are booked together with hotel accommodation. Prices are from as low as 1,499THB per person for both flight and accommodation (3days 2nights). For more information and to book, visit its website at www.AirAsiaGo.com from 10th until 16th November 2014, for the travel period from 5th January – 5th October 2015.

Be a BIG Shot under the AirAsia BIG Loyalty Programme and earn BIG Points to redeem free AirAsia flights! BIG Shots can also opt for BIG Points & cash redemption to redeem flights, with only a minimum of 500 BIG Points. For more information, please visit www.airasiaBIG.com.

*Airport tax, fuel surcharge and other optional fees not included