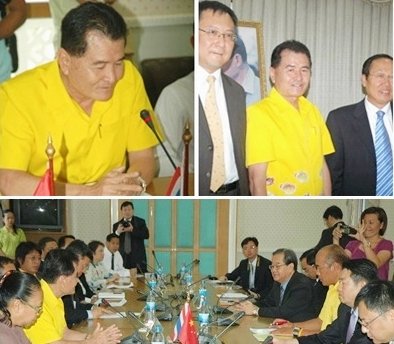 Phuket welcomed Royal Thai Consulate-General, Kunming, Mr Suraphan Boonyamanop and high-level chinese representatives from Yunnan, Guizhou and Hunan provinces of China. It is an opportunity for tourism concerning officers and representatives from China to discuss about Phuket’s plan in response to the increase of Chinese tourist number.

“China and Thailand have established a close relationship for a long time. Phuket in particular is a home to a lot of Chinese-Thais. They are also a part that push Phuket to today’s prosperity. By the way, Phuket has its natural beauty and a unique culture that attract many tourists from around the world to come. Among average number of each year visitors counted from both Thais and foreigners that is 5 millions approximately, 150,000 of that are from China,” said Phuket Governor Wichai.

Phuket Tourist Association President, Somboon Jirayut said “there were about 85,000 Chinese tourists travel to Phuket in 2007, and dropped to about 25,000 people in 2008 which is believed it’s because of the economic crisis. However, we expect to have more tourists from China in 2009 since there is a good sign in recession. A road show to Shanghai and Guangzhou recently organised in April this year by Phuket Tourist Association and Phuket Provincial Administrative Organisation, is resulting in an increase of incoming direct flights from two destinations. 4 flights a week from Shanghai and 2 flights a week from Guangzhou will bring more tourists. Yunnan, Guizhou and Hunan are the new markets we believe in its potential. Further, the association and other agencies in Phuket have a plan to arrange an “Andaman Travel Trade” that will bring many entrepreneurs in the industry from around the world to meet with ours from Phuket, Phang-nga and Krabi in coming November. Hope the direct flights between those 3 provinces in China and Phuket and the road shows in the near future can help boost up the tourism.”

Director-General, Development and Reform Commission of Hunan Province, Mr.Jiang Zoubin told that he found Phuket is another wonderful destination which has geographical differences compared with the three provinces in China. Especially the beautiful beaches we have. This trip was such a good opportunity for Phuket and Hunan to begin exchanging. Maybe in the form of the sister city.

Mr.Yao Shoulun, Director-General, Foreign Affairs Office of the People’s Government of Guizhou said “Although Guizhou is during the development, it has unique characteristics that can attract tourists. So tourist exchanging may be possible but the connection might not be direct. However, an effective public relations is needed.”

Deputy Director-General, Foreign Affairs Office of the People’s Government of Yunnan Province, Mr.Hao Kun revealed he agrees if we are about to build a strong relationship on tourism. But what Phuket should go through first is to solve the problem of unfairness that destroy Phuket’s reputation. He said we should have more road show and suggests Phuket to offer diversified programs that vary in prices. Also to put some Chinese on the sign boards and to have language and culture exchange between guides.

Governor Wichai said the suggestions from the Chinese representative are to be actualized while a good relationship will go on.

Thai Bowing Keep You Away From Swine Flu