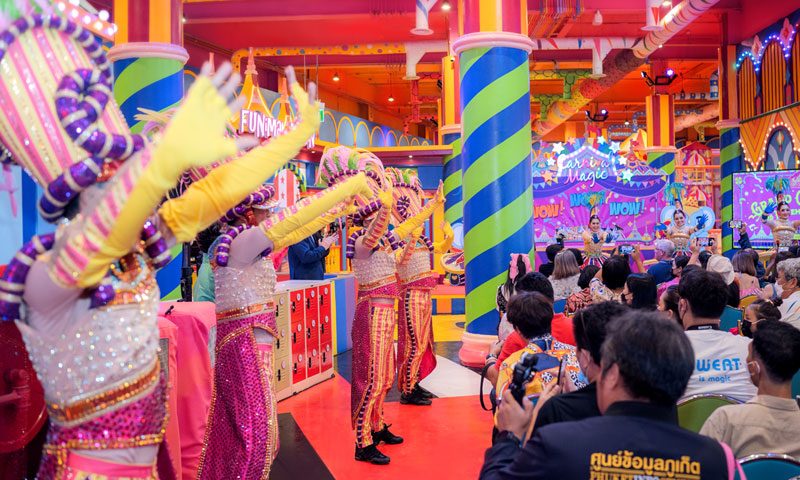 Carnival Magic, the world’s first Thai-style carnival theme park, held its grand opening ceremony this Saturday. The President of the National Assembly and Speaker of the House of Representatives, H.E. Chuan Leekpai, presided over the opening ceremony along with more than 1,500 guests of honor, with Dr. Pin Kewkacha, Chairman of the Executive Board, and Mr. Kittikorn Kewkacha, Creator and CEO of Carnival Magic Co., Ltd. extending a warm welcome.

Wow! Price – For a limited time, the price of park admission tickets with buffet dinner will be reduced from the normal price of 3,000 baht to only 2,500 baht.

Wow! Promotion – Thai nationals get a privileged price of only 1,800 baht per adult and 1,700 baht per child from the normal price of 2,500 baht for park admission tickets with a buffet dinner, until April 2023. (Thai citizen ID card required; For terms and conditions, please go to www.carnivalmagic.fun/wowpromotion).

Wow! Phuket – Want to win a free ticket? Shoot a video clip dancing to the Carnival Magic theme at any tourist attraction in Phuket and be entered into a draw to win a prize of 2 park admission tickets with a buffet dinner at Carnival Magic. Over 4,000 tickets are on offer up until 31st December 2022, with a combined value of more than 10,000,000 baht. (For terms and conditions, please go to www.carnivalmagic.fun/wowphuket)

Carnival Magic is Phuket’s newest mega tourist attraction with an investment budget of more than USD $150 million on an area of more than 40 acres. Visitors to the park will experience the spectacular beauty of the world’s first indoor parade ‘River Carnival’ which features record-breaking giant parade floats alongside hundreds of performers as well as the ‘Kingdom of Lights’ illumination park decorated with more than 40 million LED lights.

The park has already achieved 9 Guinness World Records, including the world’s longest single-chassis parade float and the world’s largest popcorn machine, making it one of the most record-breaking theme parks in the world.

Mr. Kittikorn Kewkacha said, “We believe that Phuket’s tourism industry will remain the country’s main income-generating destination for years to come. We intend Carnival Magic to become a landmark for this special island and to play a major role in attracting more tourists to support growth in Phuket.”