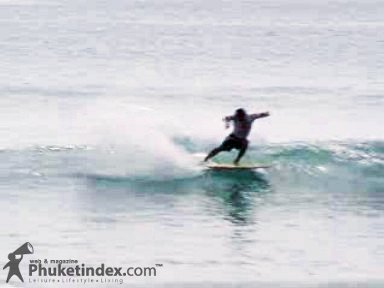 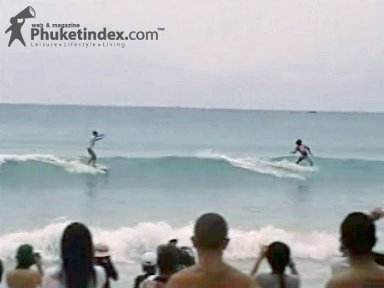 The full moon brought very high & low tides but reasonably clean 3-4 foot waves, under sunny skies with hot temperatures reaching 36 degrees, with little wind or breeze, testing all the competitors, organizing crew and a good crowd of spectators to keep cool on the white sands of Kata Beach.

But in addition to the professionally run international surfing competition, spectators and participants were also treated to fun concerts, parties, cultural shows, awareness presentations, surf instruction clinics, and a whole lot of games on the beach, over the four days.

Sanctioned by the Asian Surfing Championships, the Quiksilver Thailand Surf Competition 2010 provided local Thai surfers the opportunity to gain valuable experience competing at an international level, getting them familiar with the rules and regulations of ASC and ISA (International Surfing Association) events and opening the door to competing in other competitions held throughout South East Asia and around the world. 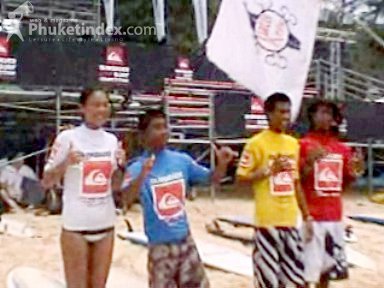 The Men’s Open winner was as expected professional surfer Tipi Jabrik, from Bali Indonesia, after just beating local favourites, and he received 50,000 THB (approx $1,500 USD) although he apparently donated it back to help develop young surfers here;

the Women’s Open winner was talented but tiny youngster Annissa Flynn, based out of Kata, who beat her older & taller Thai women to defend her crown from last year to win some nice pocket money of 30,000 THB (approx $940 USD);

and the Longboard winner was popular Kompol Pattanatalod, a local young man, who just held off a Taiwanese woman, to win 30,000 THB (approx $940 USD).

First to fourth places in each division also received cash, trophies and prize packs from Quiksilver and other sponsors. 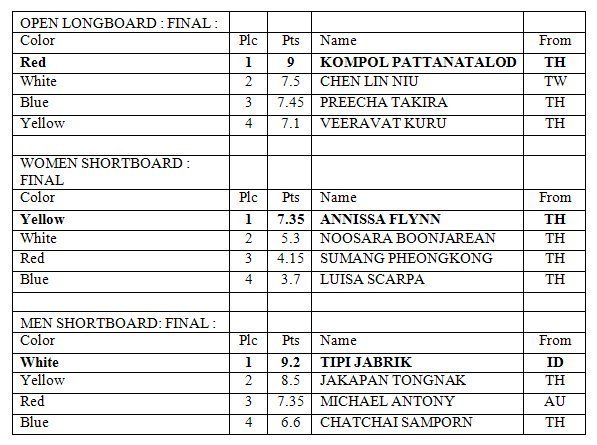 Phuketindex went along to film the last day’s semi-finals and finals with great action on the water & lively atmosphere off the water, before the results were announced later in the evening:

Layan Beach, an ideal place for parties with Keng from Sri panwa