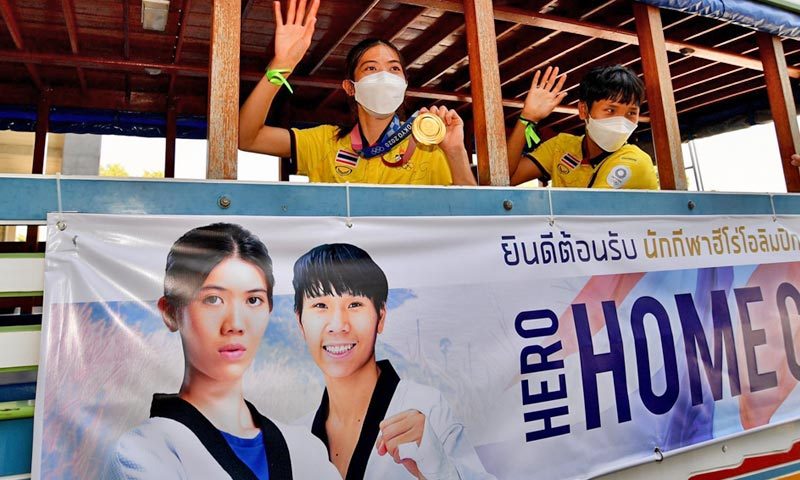 Taekwondo queen Panipak Wongpattanakit insisted she had no plans to retire, as the Olympic gold medallist returned to a hero’s reception in Phuket on Monday.

When she saw her father, Panipak knelt in front of him, performed a wai and presented him with the gold medal.

The 23-year-old from Surat Thani had a quick chat with waiting reporters and announced she had no plans to throw in the towel despite realizing her Olympic dream.

“I’m still in perfect condition. There’s no reason why I should retire,” said the taekwondo warrior, who has won every major international event including two World Championships and two Grand Slams.

“The next Olympics is just three years away. After winning the gold, I will still have a high ranking for the next Olympics. I want to keep challenging myself,” said Panipak, whose new goal is to win her second Olympic gold.

The Kingdom’s new sweetheart will now quarantine for 14 days in Phuket and help promote the government’s Phuket Sand Box campaign to boost tourism after the COVID-19 travel ban. Panipak – or “Tennis’,’ as she is called by her family – plans to pamper herself with seafood, spicy cuisine and cake after months of hard training and strict dieting for the Olympics.

Asked why she was in tears during the medal ceremony, Panipak replied:

“I’ve have been through lots of tough times in my life and sometimes I have felt tired to death. But as I reflected on those moments, it made me proud.”

Along with the medal and fame come riches for Panipak, who became a millionaire overnight in Tokyo. The Olympic gold earned her a Bt12 million incentive bonus from the National Sports Development Fund. And she will be rewarded with many more millions by commercial companies, just like other Thai Olympic gold medalists in the past.

Meanwhile, her coach Choi Choi Young Seok will finally receive Thai nationality as a reward from the government. The South Korean has dreamed of becoming a Thai citizen after spending 19 years here.

“I would appreciate it if it happens as soon as possible,” the national team coach told the media. “I’ve spent almost 20 years here. I finally made it. It’s good to make Thai people happy,” said Choi, who admitted that he had been strict with Panipak since discipline is the most important aspect of his coaching.