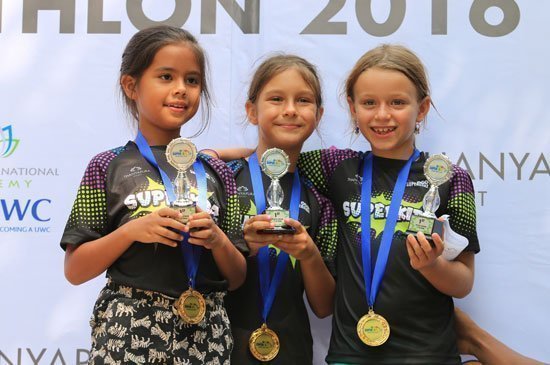 PHUKET, THAILAND – Over 70 children of all ages and nationalities attended the Thanyapura SuperKidz Triathlon last Sunday. Held at Thanyapura Phuket, a world-class sports resort in southern Thailand, the event featured a swim in Thanyapura’s Olympic standard 50-meter pool, followed by a bicycle ride through the surrounding Khao Phra Thaew National Park and rubber plantations, and a run culminating at Thanyapura’s cushioned athletics track and grandstand.

With age-appropriate distances ranging from  Tri-Tots (4 to 6 years old), Junior (7-10 years old), Intermediate (11-14 years old), and Senior (15-18 years old) and the option to compete as an individual or as a team, the SuperKidz Triathlon has over the years paved the way for young people to begin engaging in multisport. This year’s edition was held on a major triathlon weekend for Thanyapura, which also hosted TriDash Phuket the day before.

“In overall, the children did very well today and it’s great to see lots of new faces. Congratulations to those who got onto the podium and to all finishers. Keep on training and see you in the next race!, ” says Ricki Ekkarat Phanthip, Thanyapura’s Triathlon Head Coach and Founder of the running club Born Free to Run.

Triathlon training for children led by Coach Ricki and team are available all year round at Thanyapura. The next Thanyapura SUPERKIDZ event will be held on November 26, 2016.

For those who want to see the result please go to https://www.sportstats.asia/events.xhtml

Presenting one of our promotion "Grilled Pork Sparerib with Thai Spicy Sauce" at Dalah Cuisine.

IKEA Phuket: Continues to create a better life by making every meal special