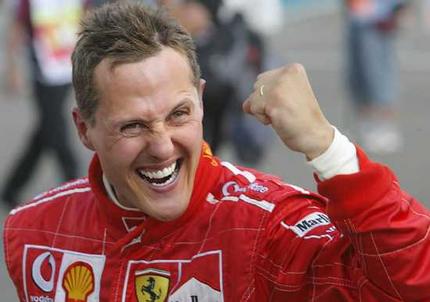 The 7th time F1champion Michael Schumacher, who retired at the end of 2006, has abandoned his comeback with Ferrari because of neck and head injury in motorcycling accident early this year.

The 40-year-old German superstar was due to replace the injured Felipe Massa at the European Grand Prix in Valencia on August 23. But he announced on his personal website that this plan has been canceled.

“Unfortunately we did not manage to get a grip on the pain in the neck which occurred after the private F1-day in Mugello,” Schumacher told his website.

“I only have to admit that my neck pinches a bit. We have to get a grip on that as health has priority — that’s the clear arrangement made with Ferrari and, by the way, with my wife, too,” added him.

Schumi started a two-day test session on Tuesday at the Italian circuit of Mugello ahead of his return. He was set to drive the 2007 Ferrari because of a ban on testing of the current car during the F1 season.

Now Schumacher has worked as a special adviser to Ferrari since his retirement in 2006, after winning five championships during his time with the team.

We don’t know when will he come back as F1driver, but as we all know, he’s a legend-as always.

I love you mum