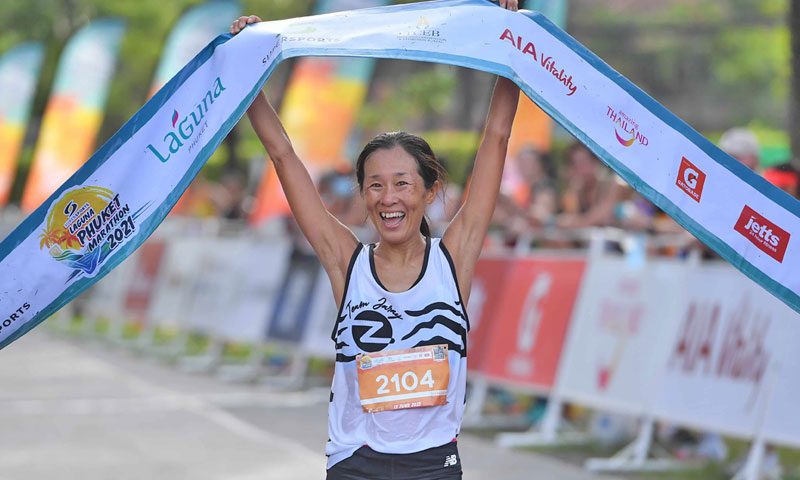 The Supersports Laguna Phuket Marathon returned with a roar as more than 7,000 runners from 63 countries enjoyed a weekend of healthy fun in the tropical island of Phuket, and some impressive run times. Thais dominated the longer distances on Sunday while a mix of nationalities shared the spoils across Saturday’s shorter distances.

The 10.5KM saw some close racing in both the Men’s and Women’s divisions. Ronald Setiawan (IND) put in a strong performance to cross the line in a time of 36:58 while less than 20 seconds behind was Nattapong Buachay (THA), with Tanadol Witsarutsin (THA) close behind in third. In the Women’s race it was Phuket-based triathlete Dimity-Lee Duke (AUS) who dominated the race, finishing in a time of 39:23, almost two minutes clear of Voraphan Nuansri (THA) with Suwaree Thanaaeknithiwat (THA) further back in third.

Sergei Zyrianov (RUS) led the 5KM field from start to finish claiming the Men’s crown ahead of Mohamed Rasheed (MDV) in second and Kiyun Kaddoura (FRA) in third. In the Women’s race, Siena Milgate (AUS) hit the front early on and took the win ahead of Auksarapuk Sangruksa (THA) and fellow Aussie Chiara Jessica Egger in third.

While the cool morning start on Sunday was appreciated by the longer-distance runners, the humidity added to the challenge and the top three finishers in the Men’s Marathon went to Thai runners. Apichai Phujit claimed the trophy in a time of 02:50:20, more than five minutes faster than the 2020 winner, while second place went to Teerayut Katrahong and Santi Fungfueang was in third. The Women’s race was similarly dominated by Thai runners with Satowa Ota crossing first in a time of 03:23:47 with Nuntaporn TengAmnuay in second and just 30 seconds behind Sasiwimon Khongjit finished third.

In the Marathon Relay it was Team Jetts that claimed the honours in an impressive time of 02:41:18, ahead of Team Surakul in second and Team Blue Tree Running Club 2 in third.

Showing signs of tiredness after his 5KM win the day before, Sergei Zyrianov (RUS) went one better than his second place in the 2020 Half Marathon to claim this year’s crown in a time of 01:13:21. Mohamed Rasheed (MDV) ran a strong race to finish second with Mood Chaison (THA) running out of track to chase down Rasheed and having to settle for third. In the Women’s race it was Thai runner Manussanun Kumpituk who went straight to the front and by the 5KM mark, she’d carved out a two minute lead which she held for the rest of the race, crossing the line in 01:34:22, just over two minutes ahead of Supisara Nunta (THA) second with Nopchaya Handittagul (THA) less than one minute further back in third.

Its two day format, family-friendly destination and safe and fun run course, together with a 2KM Kids Run, makes Supersports Laguna Phuket Marathon one of Southeast Asia’s largest destination marathons and a popular choice for families and elite runners alike.

The dates have been set for next year: the 17th Supersports Laguna Phuket Marathon will take place 10-11 June 2023. Put the dates in your diary and check out www.phuketmarathon.com for the latest registration details.

Overall Results
Top three in each distance are below. For detailed results, visit www.sportstats.asia.

Buy from the Top Valve Supplier in Malaysia

Get OneCall Mobile PBX at a Low Price