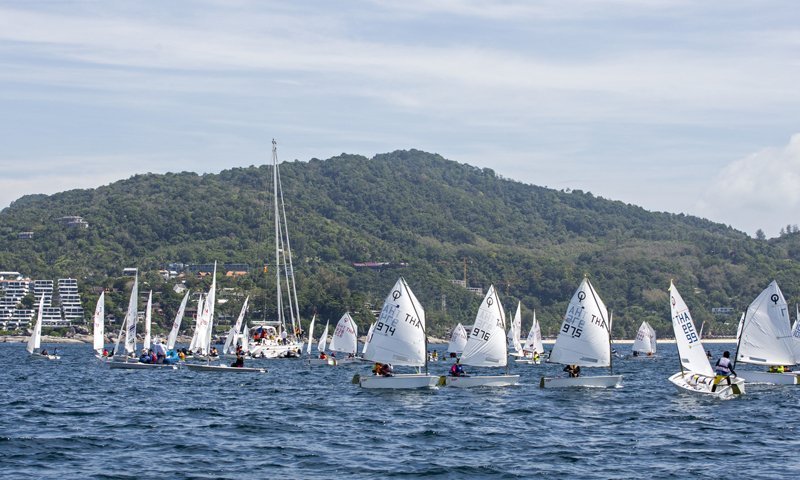 A total of 107 youngsters took to the Andaman Sea off the south-western tip of Phuket for their second round of races on Thursday, with some of Thailand’s world-class sailors testing their skills against a talented field of boys and girls from Phuket, Sattahip, Hua Hin, Songkla, Koh Phangan and other parts of the country.

Races were held in the Optimist Boys and Girls, Laser 4.7, Laser Radial, Laser Standard and 420 classes. Overseeing the action on the water was experienced King’s Cup keelboat skipper Peera Sagultem of the Royal Thai Navy and YRAT committee member, who is the Dinghy Race Officer.

“We will be staging 12 races in total, running from Wednesday to Saturday,” Commander Peera said. “Some of the young sailors here have represented Thailand at the highest levels, such as the Asian Sailing Championships.

“These up-and-coming youngsters will one day be aboard the bigger boats racing further out to sea in events such as the Phuket King’s Cup Regatta,” he said.

After a busy day on the water on Thursday, young Thai champion Panwa Boonak had the provisional overall lead in the Boys Optimist Class. Panwa was a bronze medalist at this year’s Optimist World Championship and the winner at the 2018 Optimist Asian & Oceanian Championship at the Ngwe Saung Yacht Club & Resort in Myanmar.

While Panwa finished first in all seven races held so far, second overall was M.L. Weka Bhanubbandh, with four second place finishes in the seven races.