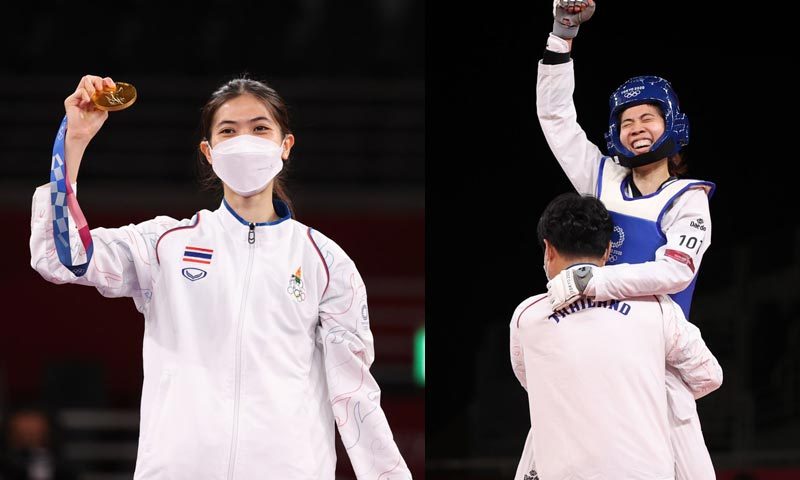 World No 1 Panipak Wongpattanakit pinned a new chapter in the Thai history book after she became the Kingdom’s first taekwondo exponent to capture an Olympic gold medal on Saturday.

The 23-year-old Thai was trailing 9-10 with 11 second before time before she turned the situation around with a hit at the trunk to go up 11-10. And despite some late attempt from the 17-year-old foe, it was too late to change the destiny.

Panipak is now the first from Thailand to lift up a gold medal in the Olympic taekwondo competition.

“I’d like to give this victory to all the Thai fans,” said Panipak. “All the hard work finally paid off. I’ve been through a lot of difficulties. My long-time desire was finally answered.”

Previously Thailand never won any gold from other sports except from boxing and weightlifting. The country first celebrated the historic gold (first gold by a Thai) from Somluck Kamsing in boxing featherweight at the 1996 Atlanta Games and the first gold from weightlifting by Udomporn Polsak in the women’s 53kg the 2004 Athens Games.

Panipak also produced Thailand’s 10th gold medal in the Olympiad after all previous nine came from either boxing or weightlifting (five golds from weightlifting and four from boxing).

Apart from the prestigious gold medal, Panipak will return home a new millionaire as she will be awarded a BT12 million for the victory according to the National Sports Development Fund policy.

This is Panipak’s second Olympic medal after she settled for a bronze in Brazil five years ago. She is also the third Thai in the history to win two Olympic medals after boxer Manus Boonjamnung won a gold in the 2004 Games and a silver four years later and female weightlifter Pimsiri Sirikaew won two silvers in 2012 and 2016.

She is to fly back to Thailand on Monday and will spend a seven day quarantine in Phuket.

However, the other Thai taekwondo exponent Ramnarong Sawekwiharee, after a 23-7 win over Safwan Khalil of Australia in the opening round, was stopped in the second round by Vito Della’Aquilla of Italy 17-37 in the men’s 58kg.

Panipak’s routes to the final:

beat Abishag Semberg of Israel 29-5 in the first round.

Beat Thi Kim Tuyen Trong of Vietnam 20-11 in the quarter-finals.

Beat Miyu Yamada of Japan 34-12 in the semi-finals.

The History of the Round-Neck Polo Shirt