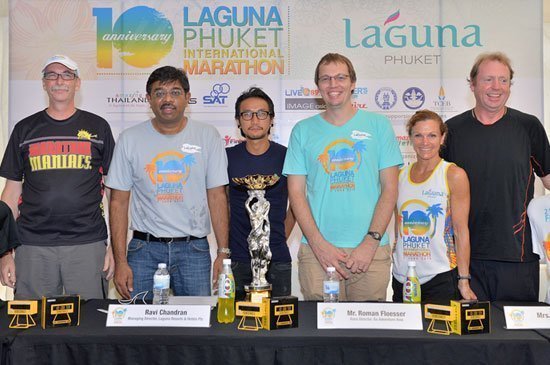 Family-friendly Iconic Event with runners of all ages and abilities on scenic island courses will see thousands “Run Paradise” on Sunday 7 June 2015.

2015 Laguna Phuket International Marathon (LPIM), the 10th edition of the annual Run Paradise race which brings thousands to Phuket each year, was previewed on Saturday, 6 June for media by organisers and sponsors in the event’s Expo Marquee at Laguna Grove, Laguna Phuket.

Like every year, athletes booking their slots in Laguna Phuket’s annual marathon and triathlon series are being asked to raise funds through donations and sponsorships for the resort’s long established “Laguna Phuket Foundation” to operate its various charitable programmes. Over the years, millions of Baht was raised to fund such initiatives as local school renovation, survival swim, and mobile learning centre.

“On behalf of Laguna Phuket and Laguna Phuket Foundation, I’d like to thank the organisers, sponsors, running clubs, runners, and member of the press for being so kind to support the charity side of this event. It is our hope to make the race a Run Paradise, at which runners enjoy running, meeting their peers and participating in fulfilling charitable causes” he concluded.

“I started running the marathon to challenge myself and I joined Laguna Phuket International Marathon since its first year in 2006. I love to be a part of this race and its community which is why I chose the 10th LPIM as the venue to complete my 100th marathon,” said Mike,

“I also want to leave a positive impact for Thai kids and the Phuket communities. I believe the donation made to Laguna Phuket Foundation today will be put to good use” he concluded.

Also making their appearances are Mr. Andrew and Mrs. Sue O’Brien, Couple on the Run from Australia who ran 8 marathons together in 8 countries in 8 weeks, a feat they later recounted in a best-selling book “Couple on the Run” in 2008. The couple made their first LPIM appearance in 2013, and will also run their 100th marathon together at the 10th LPIM on Sunday.