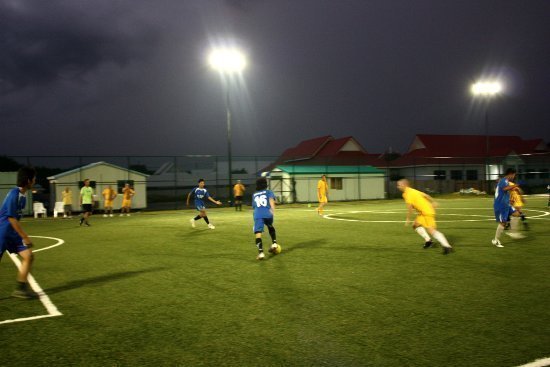 Season 4 of the successful Adults Futsal League (AFL) closed on July 1st, with the Main Cup  going to Captain Karl Wards Phuket Morning Star, and the Top Goal Scorer  to Mark Lightfoot of the Island Boys. The much anticipated Season 5 kicks off  every Thursday starting on September 2nd and is to be hosted again at Phuket International Academy Sports and Leisure Club. September also sees the beginning of Season One of the Vets Futsal League (VFL), which starts September 6th and every Monday thereafter.

Both competitive leagues take place at the developing PIA Sports and Leisure Club (PIASLC) in Thalang, on a 50 x 30metre floodlit Limonta ’Soccer Pro’  FIFA approved astro turf soccer field. The AFL competition is played as 5 a side game, with 20 minutes play each half. This season, four teams will enter the semi final round for a chance to be crowned AFL Champions with the AFL Cup and medals awarded to the winning team.

“We ran a very successful  AFL 4th season and are very excited with the upcoming Season 5, where we are expecting more than 12 teams, playing for the top 4 positions to enter the semi final round and the chance to be crowned the AFL Champions.”, said Martin Ware, Organizer of the League.

The long awaited Vets Futsal League (VFL), just for over 40’s, will be played 6 vs 6, with rolling subs during the 20 mins of each half. Max squads of 12 players with a transfer window during the season. This will be run as a league format.

Martyn Ware, Director of Sports at PIASLC and the event organizer commented, “The new VFL will show experience, quality and the never ending excitement that football brings to the Phuket community.”

Team registration has opened for both exciting and growing Phuket futsal leagues.

For more information and registrations, please contact Martin Hill, on football@phuketinternationalacademy.com or call him on 085 331 0295.

Or visit http://www.phuketinternationalacademy.com/piaslc/sports-leisure-club-news/special-events-calendar-schedule/adult-futsal-league-and-vets-futsal for more info.