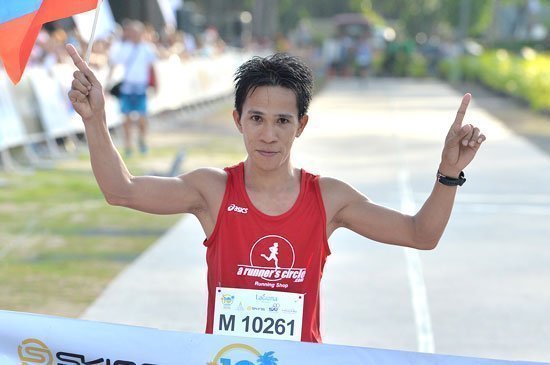 Mario Maglinao, 31 yrs old from Philippines won the tenth Laguna Phuket International Marathon (2015LPIM) as the annual running festival took to the island’s roads with more than 5,700 entrants of all ages and abilities from 43 countries competing on a variety of distance courses in an atmosphere of community fun and charity fund-raising.

His winning LPIM trophy represented 3nd annual partnership with a sister race – the Italian 10km Igrani Run – in an initiative by Laguna’s sponsor the Tourism Authority of Thailand (TAT), which also sponsors the Igrani Run.

“I ran the marathon since 2005 in the Philippines and I had run over 40 marathons so far,” said Maglinao,

“I had a good start today but I tried to save my energy during the first half because I know the weather is going to be very hot later in the race. I picked up in the 2nd half and started my lead after the 21st Km,” he continued about the race.

“This is my first time to LPIM and I love it. I’m definitely coming back to defend my title next year. For those of you who are training to be a marathoner, keep training and train hard. It will bring success to your run. See you at next year’s race!” he concluded.