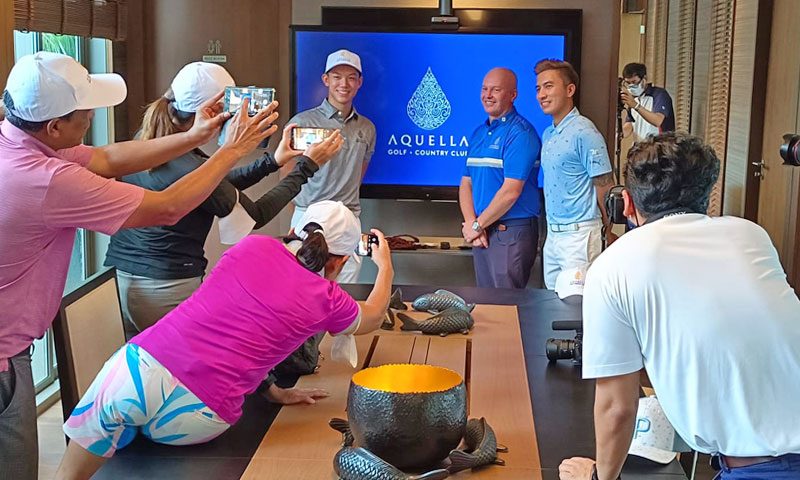 Singapore’s 20 year-old, Brandon Han Zhen Guang one of Singapore’s elite young players has joined the expanding stable of players to be supported by Aquella Golf & Country Club. Currently studying at the Singapore Sports School / NGEE ANN Polytechnic, where he is preparing to graduate in June, when he will then look at further his golfing career, with the goal to join the professional paid ranks. Brandon has represented Singapore in numerous international events as part of the Singapore National Squad, where he most recently competed in the Asian Amateur Championship, staged in Dubai, he is currently Singapore’s 3rd highest-ranked player on the World Amateur Golf Rankings.

As the club’s representative, Brandon will help to increase exposure and awareness of the club within the Singaporean golfing community through his presence in both domestic and international events. On signing the agreement Brandon stated, “I had heard many great things about Aquella Golf & Country Club and was delighted when they reached out to me with this opportunity, I feel truly privileged to be associated with such a wonderful and ambitious facility and really look forward to working with the management to help them further expand its burgeoning reputation within the Singapore market”

Aquella Golf & Country Club, General Manager, Simon Mees expressed his delight on the recent addition to the club’s ambassador programme “We were introduced to Brandon through one of our media affiliates, who could not speak highly enough of him and his abilities both on and off the course, following engaging conversations on our collaboration, it is easy to see why he is held in such high regard. Brandon is an extremely personable young man who is immensely passionate about his golf, displaying maturity beyond his years with boundless ambition to further his golfing career, which is something we can all relate to. It is our pleasure to support him on his journey, and we truly look forward to supporting him as he climbs through the ranks”