I have witnessed a ten man football team win a game before, but I cannot remember ever seeing a ten man side score 3 goals to win a game. But that’s what was witnessed by just over 1,000 frustrated Phuket FC fans last night as they took on Ayuthaya in the 2nd round of the Thai FA Cup, which saw the visitors go home with a 3 – 4 victory, and one, perhaps more Phuket fans in tears.

Yes, it was an exciting game, but what game that sees 7 goals wouldn’t be, but Ayuthaya, who were down to 10 men with 10 minutes remaining in the first half, played the remainder of the game like they still had 11 men on the pitch, whilst Phuket played like they had 9. 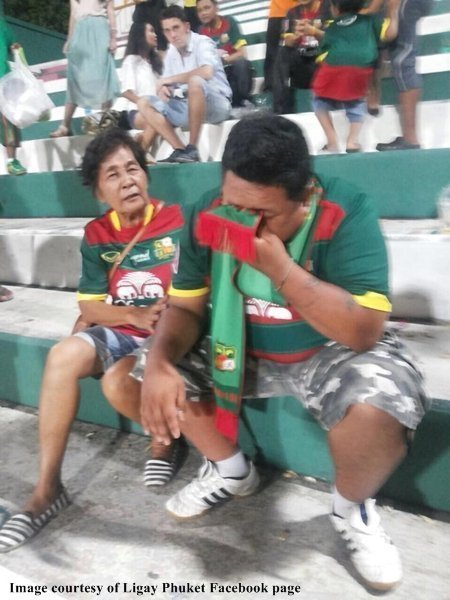 When a side goes down to 10 men so early, their opponents usually make them run for their money to drain their energy, Phuket didn’t, and they were the ones running for their money. Once again, the presence of Phuket’s Japanese defender Sato was greatly missed, it was simple defensive mistakes, or should I say lack of defence that gave Ayuthaya their 4 scoring chances. And Coach Teco’s decision to replace Tales Dos Santos, the strongest Phuket defender on the pitch, with Christian Alex, a player who has done little or nothing to help his side to victory this season was seriously questionable, and done nothing for his team’s defensive strategy.

The start of the season looked promising for Phuket FC, but unfortunately it appears that they are starting to go the same way as in previous seasons. But I for one certainly hope they can turn around their run of 2 lost games around this Saturday, 26th April, when they take on Nakhon Pathom in their 9th Yamaha Division 1 game of the season, a game they really need to win to keep them in contention for promotion to the Thai Premier league. Kick off is at 6.30pm at Surakul Stadium.