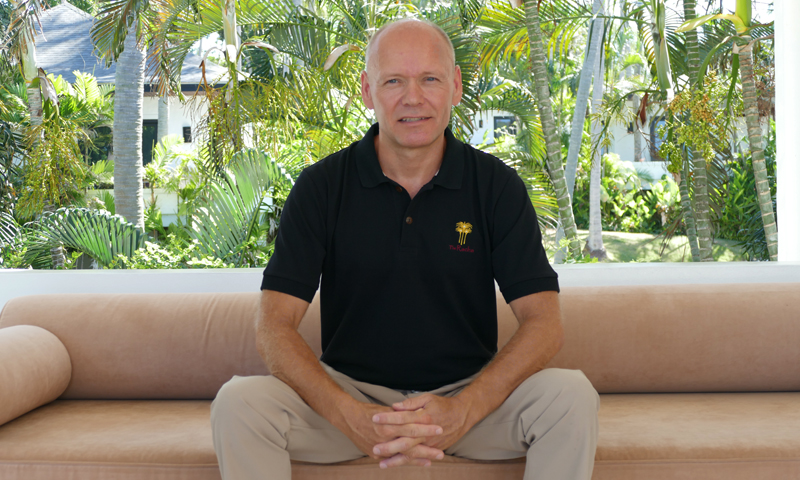 The Racha, a member of Small Luxury Hotels of The World, warmly welcomes Tom Drange back onboard its Executive Team.

Tom served as Executive Chef in the pre-launch of The Racha in 2004. After 16 years away, he’s returned as Director of Food & Beverage.

Says Devan Bhaskaran, General Manager of The Racha, “Tom was a great team player in the early days of The Racha. We were so fortunate then to have onboard such a talented chef and go-getter. Then came the 2004 Boxing Day tsunami and it was back to the drawing board for the resort. As The Racha grows from strength to strength, we are excited to have Tom back. His wealth of experience will serve our guests and staff well.”

Hailing from Norway, Tom Drange comes from a family where cooking takes pride of place. His sibling, cousin, four uncles are all chefs and restaurant owners. So eager was he to learn the ropes that at the tender age of 13, he took the unusual job as busboy in his hometown’s only Chinese restaurant. Culinary school soon followed which lead to stints around the world. At sea, he’s served as Chef de Cuisine at Prego Restaurant onboard Crystal Cruises M/S Crystal Harmony and cooked in Offshore North Sea Oil Rigs.

His profession has taken him far and wide – to stints in three to five star hotels in USA, Italy, France, Qatar, Egypt, and Asia. He’s worked with Starwood, Radisson, Hilton, Dusit, Centara Hotel Groups in roles from Chef to Operation Manager. Prior to his current appointment at The Racha, Tom was Executive Chef at Centara Hotels & Resorts, Phuket.

Adds Tom, “What attracted me to The Racha 16 years ago, besides the sheer beauty of the island, was the Management’s vision of a eco-luxury island resort, where nature takes pride of place. From the building stages, The Racha went to all lengths and costs to ensure land and sea protection. Returning after so many years, it’s heartwarming to see how far the resort has come. Today, The Racha is as much awarded for service as their commitment to responsible, sustainable luxury tourism.”

In 2018 & 2019, the resort was awarded EarthCheck Silver Certifications for environmental sustainability. In 2018, the resort was certified a Gold Level Green Hotel by the Thai Ministry of Natural Resources & Environment.

In 2019, The Racha was crowned ‘Asia Winner of Luxury Island Resort’ by World Luxury Hotel Awards.

Tom Drange’s new role includes working with Department Heads. His number one priority is seeing to the well being and satisfaction of every single guest at The Racha.

Visit an anti-aging Clinic in Bangkok

Anti-aging Clinics in Bangkok Can Make a Real Difference in Your Life.