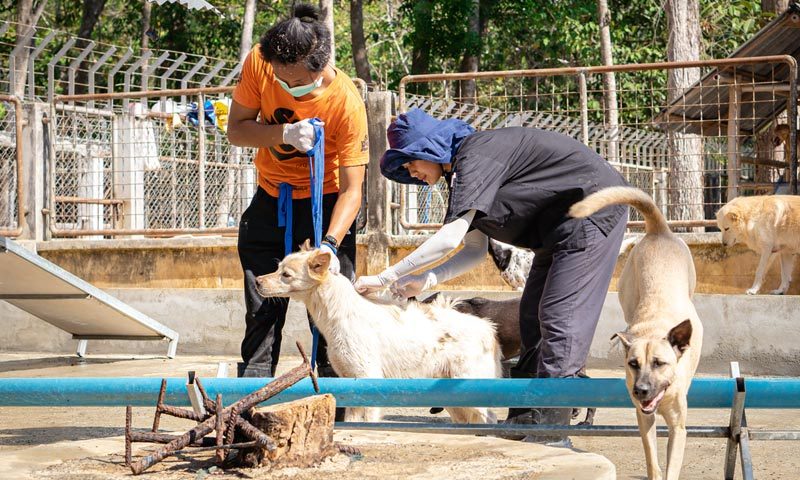 Soi Dog Foundation has held an emergency vaccination drive at the Phuket Stray Dog Shelter in Thalang – also known as the government dog pound – to help stem an outbreak of canine distemper virus.

Transmitted through direct contact and airborne exposure – namely sneezing, coughing and sharing food and water bowls – distemper can spread quickly in a shelter environment, often with deadly consequences. There is no definitive cure for the viral disease, and dogs are instead given supportive care and treated for any secondary infections.

A total of 248 at-risk dogs were vaccinated on-site against the disease, and those already infected were transferred to the Soi Dog shelter in Mai Khao for treatment.
As part of Soi Dog’s longstanding commitment to the hundreds of dogs at the Phuket Stray Dog Shelter, a team of their vets, community outreach staff and animal rescue officers visit on a weekly basis to ensure all dogs are neutered, vaccinated, dewormed, protected against ticks and fleas and treated for any other health issues. In the latter half of 2021, the team administered over 3,100 treatments on-site and admitted 75 dogs to their hospital for intensive care. (The Phuket Stray Dog Shelter was closed to external assistance for the first half of the year.)

The distemper outbreak at the shelter is one in a string of recent incidents which has led Soi Dog to speak out about the dangers of the unmanaged sheltering of animals. Just a few months ago, the foundation helped stem a similar outbreak on Koh Kood which originated at a government shelter and quickly swept the island’s street dog population, killing over 60% of the dogs at the shelter and many others across the island.

More recently, the foundation shut down an illegal shelter in Surat Thani and rescued 17 dying dogs who had been left to languish in a cramped and filthy space with no food or fresh water available. The dogs were extremely malnourished, infested with ticks and fleas and suffering from chronic skin infections as well as other medical conditions that had been left untreated.

“We at Soi Dog Foundation are against sheltering as a dog population management strategy,” said Soi Dog’s International Director of Animal Welfare Dr Alicja Izydorczyk. “Not only has it proven to be completely ineffective as such, but because most of these shelters are underfunded, understaffed and lack competent management, they quickly turn into death camps for dogs.”

Welcome in the year of the Tiger with our Roaring special offer!