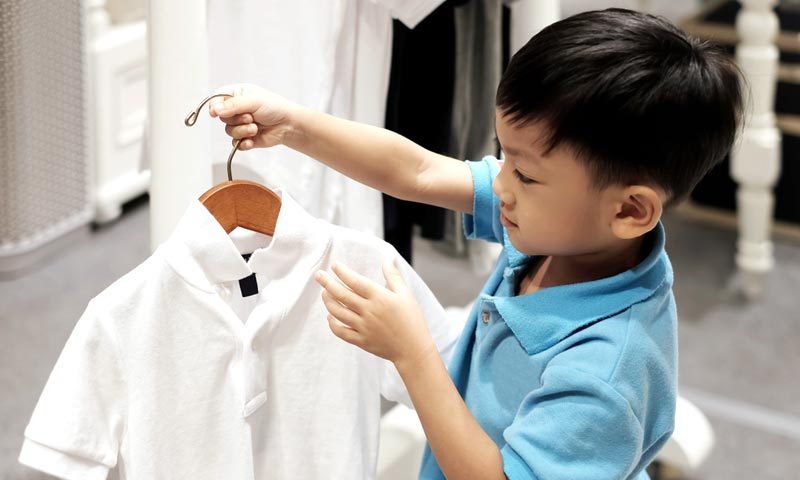 Lacoste was a tennis player back in the 1920s who found the traditional “tennis whites” of the era too restrictive to play his best on the tennis court. The usual tennis outfits for men in that age consisted of long-sleeved, button-down shirts and long trousers.

Lacoste designed a white, short-sleeved cotton shirt with a flat rounded collar, a short button-down placket and shirt-tails that were longer in the back than they were in the front. The collar and shirt-tails were to look presentable on court where shirt-tails had a tendency to come untucked during the strenuous action.

Lacoste retired from tennis in 1933, and, as the shirts had become popular with tennis players, he started marketing the shirts and changed the accepted tennis attire forever.

Taking a Cue from the Tennis World

The twenties and thirties were the time when polo was enjoying its greatest popularity. Polo players traditionally wore thick, oxford cotton, button-down, long-sleeved shirts. And the players had the same restriction problems that tennis players had.

John Brooks, one of the founders of Brooks Brothers, had introduced these shirts for polo some years before, but once polo players saw the freedom of movement provided by Lacoste’s tennis shirts, they adopted the shirts for use in their own sport.

They became commonplace in both the tennis and polo worlds and started being favoured as casual shirts by the general public. By the 1950s, everyone started calling the shirt invented by a tennis player for the game of tennis a “polo shirt”, even tennis players of the era.

Influence of the Mods

By the early 60s, several clothing manufacturers had introduced their own lines of round-necked polo shirts. The name “polo shirt” had stuck, and the popularity of the shirts was growing. One of these manufacturers was called Fred Perry. Fred Perry was a famous British championship tennis player who partnered with an Austrian Football player in the late 40s and launched a clothing brand that bore the name of the British champion.

One of their products was a line of polo shirts that was first introduced at Wimbledon in 1952. The shirts were an instant hit with the most fashion-conscious and trendsetting social group of the time, the “mods”. With the mod’s tacit endorsement, the round-necked polo shirt’s popularity exploded all over the world.

Today, nearly everyone, both men and women, has at least one round-necked polo shirt in their closet. They have replaced the button-down shirt in many modern companies as they are more comfortable. Many of these companies use the round-necked polo shirt as a uniform, embroidering or silk-screening their logos on the shirts and having them made in their corporate colours.

Discover the comfort, breathability and style that these fashion favourites provide for any occasion, work or leisure by buying some polo shirts today. You won’t be disappointed.

Ratchanok shuttles into Tokyo for one last shot at Olympic gold