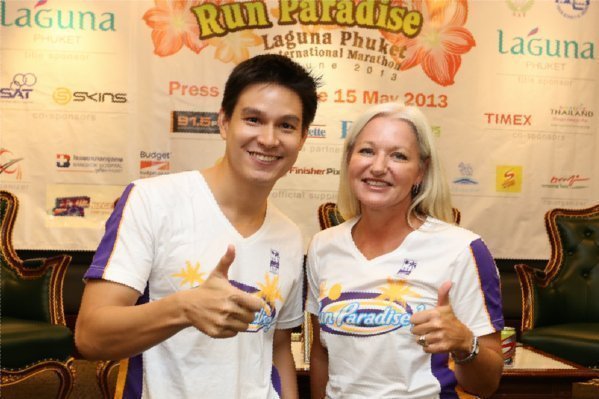 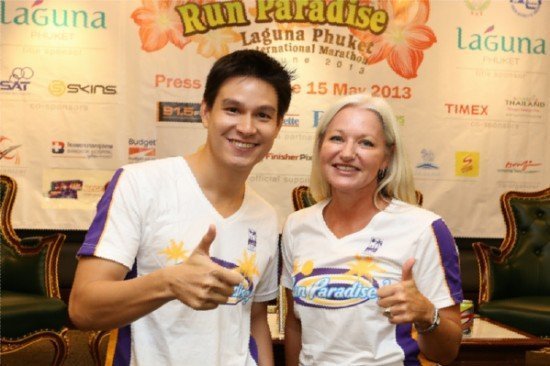 Athletes booking their slots in Laguna Phuket’s 2013 marathon and triathlon series are being asked to raise funds through donations and sponsorships for the resort’s long established “Laguna Phuket Foundation” aimed at collecting THB 1 million per year to operate its various charitable programmes.

A partnership with Ban Yaan Sabaa School in Phang Nga province, the latest initiative of the Foundation, was launched on Wednesday 15 May in Bangkok by actor, author, and aspiring marathoner, Krittapas “Krit” Sakdidtanon, newly-appointed Charity Ambassador of the 2013 Laguna Phuket International Marathon (LPIM), which will be held on Sunday 9 June.

In previous years, athletes from Thailand and all over the world have raised millions of baht to fund several school rebuilding programmes through LPIM and the Laguna Phuket triathlon events.

Last year, over THB 1 million was raised by athletes for Laguna Phuket’s “Fully Booked!” Mobile Learning Centre. Aiming to provide alternative learning resources for children from kindergarten to primary school ages and their teachers in rural areas of Phuket and Phang Nga province for a five-year period, the project is currently scheduled to commence early next year.

Among them is the much needed renovation of the student canteen to ensure a safe and healthy environment for children to learn in.

As an aspiring-marathoner, Krittapas “krit” Sakdidtanon, is particularly pleased to be spearheading an initiative that will benefit children in nearby Phang Nga.

“I’m delighted to be Charity Ambassador of the 2013 Laguna Phuket International Marathon and thrilled to be involved in an initiative that gives athletes an opportunity to enjoy their run even more, knowing that besides running for our health, we’ll also be running for our kids,” he said.

Krit, aged 32, a rising actor who appeared in “Khun Chai Pawornruj” a popular primetime TV series, will be at LPIM – dubbed “Run Paradise” – on 9 June to lead a fundraising caravan on the half marathon.

Debbie Dionysius, Laguna Phuket’s Assistant Vice President of Destination Marketing, said: “We’re all very excited at having such a fantastic ambassador to launch and lead this worthy project.

“Raising money for Laguna Phuket Foundation which supports various developing sustainable school programmes is a great way for our thousands of athletes from all over the world to leave a positive impact on Phuket and the surrounding areas.”

Runners can register for the event on the LPIM website www.phuketmarathon.com.

Phuket set to rock to the sounds of Jeremy Healy