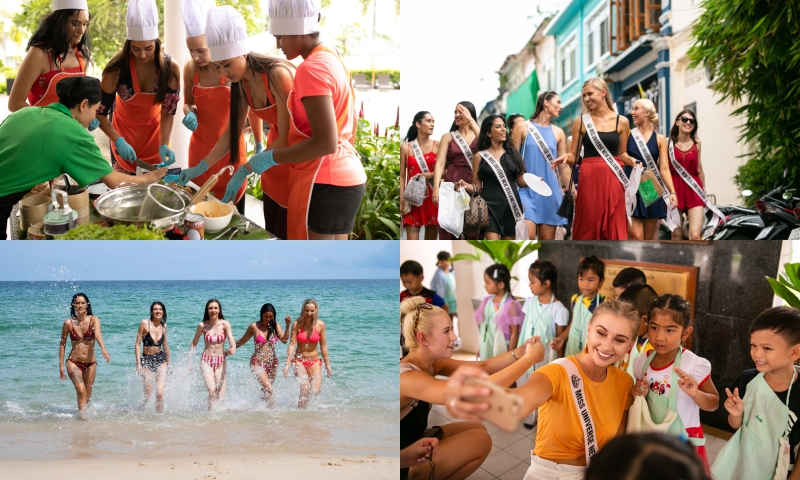 Are they Beauty Queens or Masterchef Contestants ?

The day after the Miss Universe New Zealand Contestants arrived at Cassia Phuket
All of the finalists headed for lunch at the Seedlings Restaurant. However this lunch had an interesting twist, the contestants had to prepare their first course. 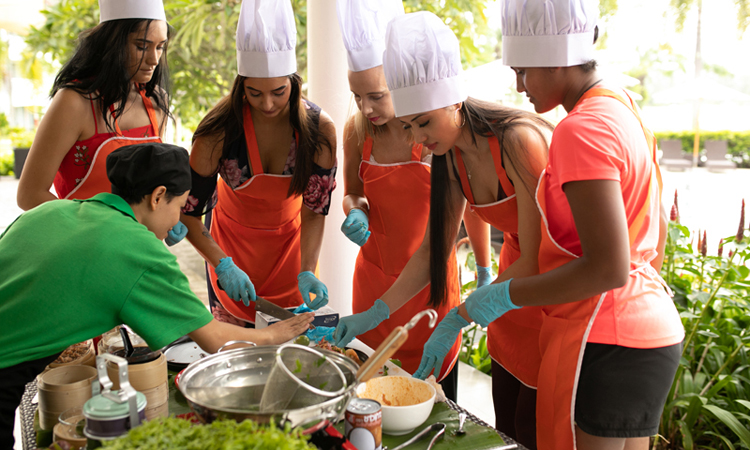 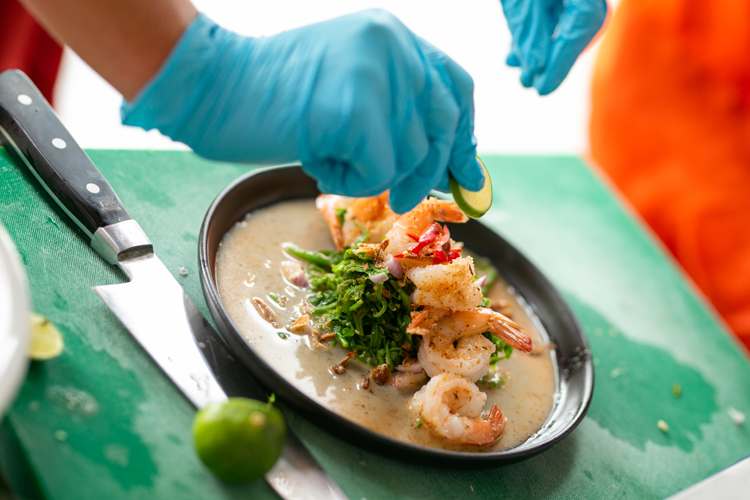 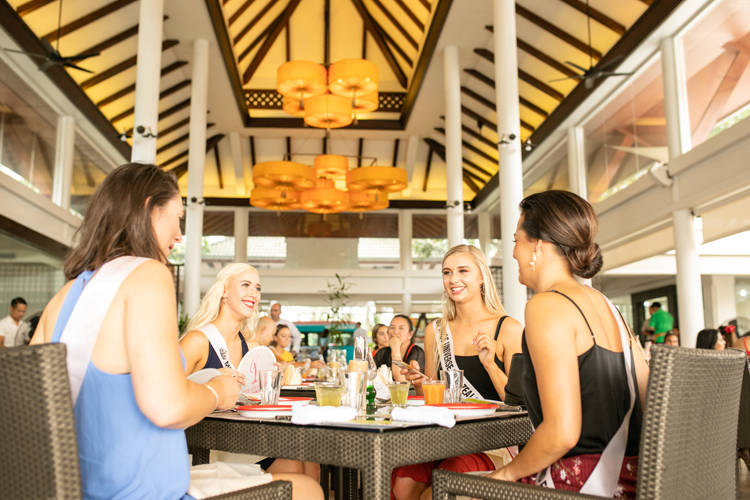 The young ladies were divided into 3 groups and given the recipe and a quick demonstration by the chefs and then ‘battle commenced’. Although not part of the Miss Universe NZ competition the rivalry was fierce. But it seemed that perhaps some of the girls got a little bit confused over how much chilli paste to add in.

Contestant Lydia Smit thought that 3 spoonfuls of Chilli Paste seemed like a ‘good’ measure, “although I have to say when we got to taste our final dish I think that perhaps our salad could have been called … ON FIRE” she said.

The name ‘Seedlings’ comes from the fact the Resort owners embrace and involve the local community giving jobs and opportunity to disadvantaged youth in the local community. This is something that really struck a chord with the young woman, many of whom have experienced their own challenges in their home country of New Zealand.

“To see a Resort Owner take such a pro-active and positive community-based stance, in a world where the bottom line is increasingly ‘all about profit’ is both a rare and refreshing surprise”, said Nigel Godfrey the Miss universe NZ CEO, “It makes our stay at Cassia feel even more worthwhile.

All too often tourists visiting Phuket only see the inside of their resorts and the nightlife of Patong. However the Miss Universe New Zealand finalists really enjoyed their visit to the Old Town in Phuket.

“New Zealand is a very young country” said finalist Cassie Angus, “so to see a street where all of the buildings are well over 100 years old isn’t something we see everyday back home. The architecture is beautiful and I really love the colours and particularly the rickety old shutters on the windows”. 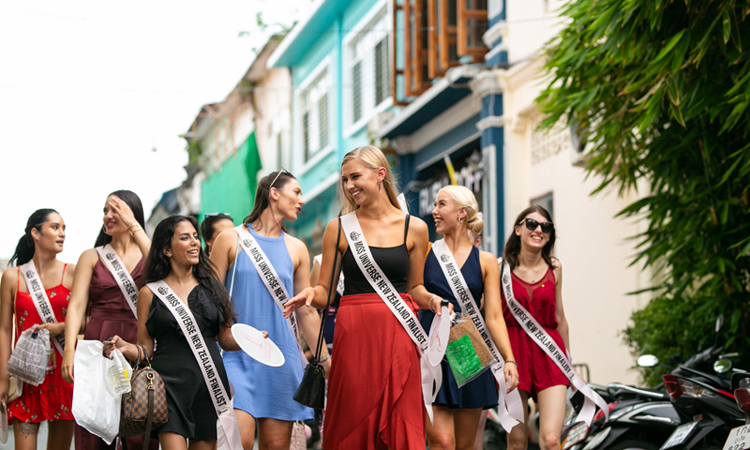 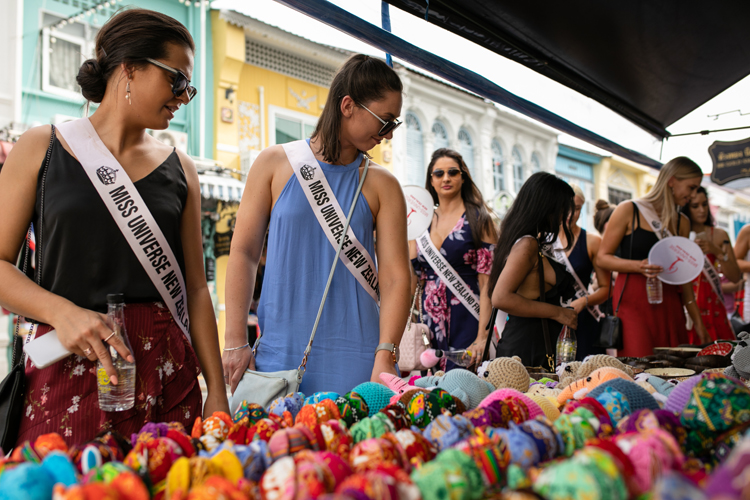 Of course in the Old Town there are some very NEW Artworks and the girls are never shy of taking a selfie or posing for a shot, but they also love meeting the locals and are always ready to pose for a selfie with anyone who asks.

The Old Town has one element that had universal appeal to all the girls … ‘Shopping’ and many were hoping they could return on the weekend when the market comes to the town.
However one hit, was a young street vendor who was making personalised cork Bags and Wallets. First one contestant stopped, then another and then 2 more.

“By the time we were finished, I think she’d sold enough to become one of our sponsors”, said contestant Charissa Rehu.

All too quickly it was time to jump back on the bus and return to the Cassia Phuket, but not before finalist Diamond Langi spied a photo opportunity with some young fans. An enormous group of children were heading home from school and they suggested she should hop on their bus.

“We wouldn’t get away with a bus like that back in New Zealand, we have really strict health and safety rules”, said Diamond, “but I have to say that with the heat you experience here in Thailand I just love the fact that there are no windows – Now that’s what I call REAL ‘air conditioning’

In a world where everyday another headline breaks on pollution in our Oceans and Waterways it’s great to be able to report a ‘good news’ story.

The Miss Universe New Zealand contestants have been staying at Cassia Phuket where they have been filming the swimwear part of the competition. Five of the finalists headed to the beach and had a great time playing on the sand and in the surf. 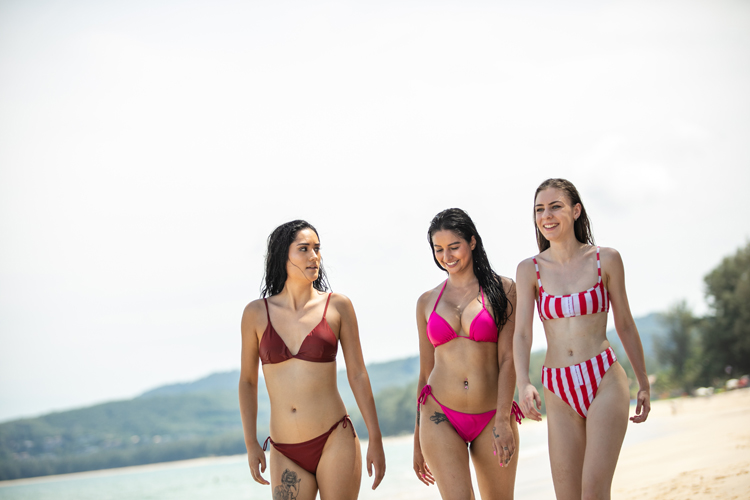 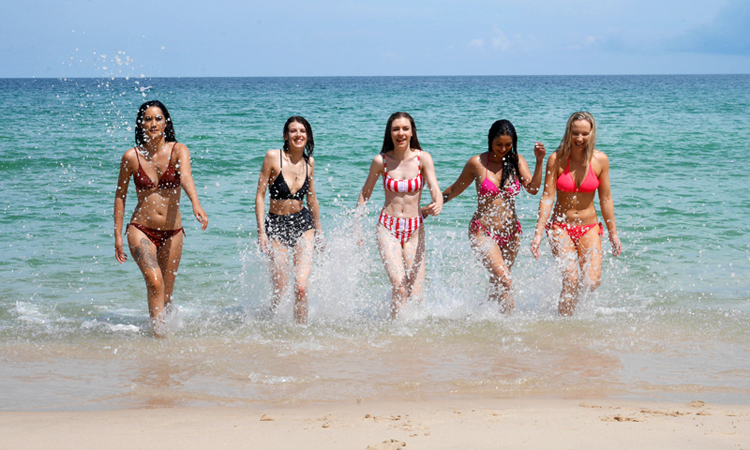 “You hear so many stories about pollution throughout Asia, so it was just fantastic to see how pristine and clear the ocean is here”, said contestant Ami Grillhard, “The Beach itself is also incredibly clean with virtually no litter”.

One thing that has really impressed Miss Universe NZ CEO Nigel Godfrey are the lengths that the resort go to reduce their ‘footprint’. “I have been really impressed that here at Cassia they don’t continue to use the ‘throwaway’ toiletries in the rooms and that things like the complimentary water in the rooms is delivered in glass bottles and not plastic. Being environmentally aware is something we all need to focus on and coming to a resort where the owners take their responsibility seriously is really refreshing. Although I’d like to see the local convenience store stop individually wrapping their bananas is plastic. God gave the banana a perfect wrapper!” Mr Godfrey said with a smile

The Miss Universe New Zealand Finalists visited the Laguna Kindergarten and it was undoubtedly a highlight of their trip. Arriving at the Kindergarten aboard the traditional open resort bus from Cassia Phuket most of the children couldn’t contain their excitement. As soon as the girls entered the school there were hugs all round.

Miss Universe NZ works with the International Children’s Charity Variety and over the last few years has raised over $200,000 for disadvantaged Kiwi Kids, and so this Kindergarten is a project that is very close to their hearts. 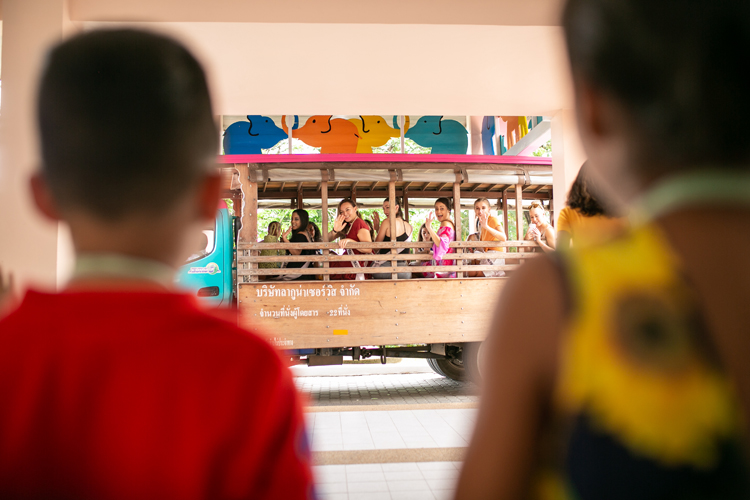 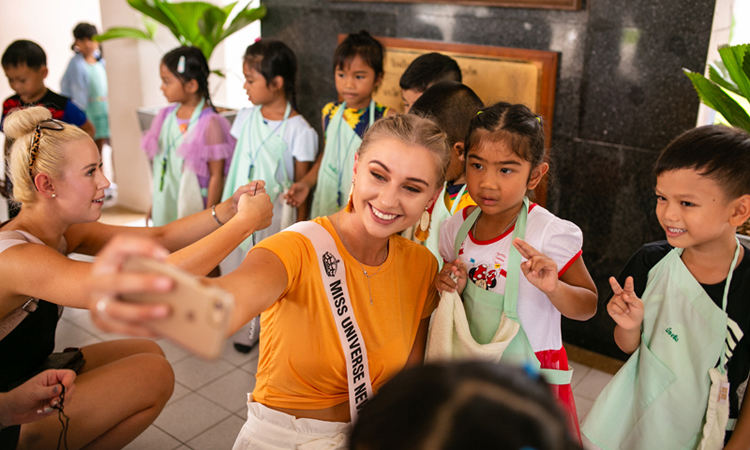 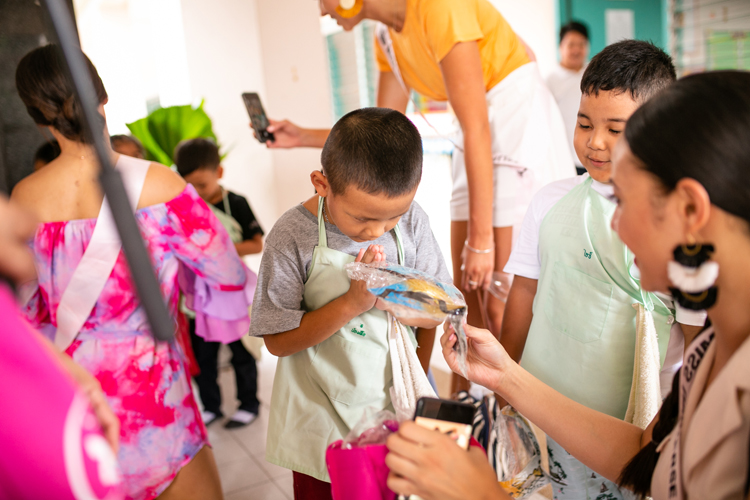 The Kindergarten has been fully funded by the owners of the Laguna Resort since it began and it now looks after more than 180 children.

“I just can’t believe that it’s free for all the children, we don’t even have a pre-school like this back in New Zealand”, said Hanna Brown, one of the finalists, who back in NZ is a serving Police Officer. “It really does show that the owners of this resort actually are about their staff and the local community”.

The Young Kiwis then helped serve lunch and gave the children gifts. It was also Miss Universe NZ CEO, Nigel Godfrey’s birthday – and the children gave him an impromptu performance of ‘Happy Birthday’.

“I was really impressed, these kids are only around 3 and 4 years old and they sang Happy Birthday to me in English, I’m 55 today and if you asked me to sing a song in Thai I would struggle”. said Mr Godfrey. “What today has shown our finalists is just how lucky they are. They have travelled thousands of miles to stay in a luxury resort but a visit like this one today reminds them what is real, it brings them back down to earth and makes them realise that a smile and a hug has the same importance in any language”.