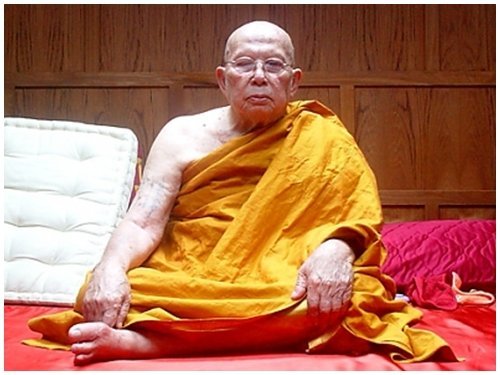 On September 17th, at Sirisirasupharam (Luang Pu Supha) Temple, Wichai Praisa-ngob, the Governor of Phuket, presided over a blessing ceremony to venerable Supha Kantasilo, a renowned monk in Phuket, on the occasion of his 114th birthday anniversary.

The ceremony began with the blessing, the particular praying called ‘Suad Pan Yak’ and ‘Suad Noppakroa’. Then 119 birds were released and 139 scholarships were given to needy students. Then venerable monk Supha handed over 100,000 baht in money that had been donated by H.M. the Queen Sirikit to Wachira Phuket Hospital. This money would be used later in building monks’ facilities at the hospital. Finally, the venerable monk was offered Sao Semadharmajak by representatives of HRH Princess Sirintorn, Phuket residents, and his followers from other provinces.

Venerable Supha Kantasilo was born on September 17th 1896. He had been ordained as a monk since he was only 9 years old. He is the oldest monk in Thailand.