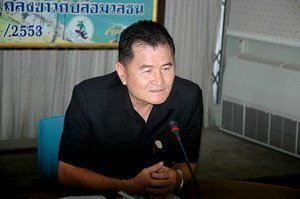 Phuket’s Governor Vichai Praisa-ngob in the first press conference of the year 2010 which was held yesterday (4 Jan), further than report the conclusion of the sea and road safety accident reduction and prevention campaign during the long holiday, talked about his accomplishment thought 8 months in duty and expressed his thanks for everyone’s support and good cooperation.

Governor Vichai said in the past year many problems have been solved and some projects such as jet ski registration, airport expansion, new Sarasin bridge, Thalang Victory historical garden construction project, scout camp improvement projects etc. are during the execution stage.

“We are also finding the solution for traffic problems. The 600-metre connecting road between Sakdidetch Rd. and Rattanakosin 200 Pee Rd. project is obstructed by the laws. For the new Airport – Phuket town road construction project, concerning agencies are working on negotiations with local landowners.” said Phuket’s Governor.

He also showed worries over environmental problems since it is very difficult for the police and government to catch and punish lawbreakers.

Drug is another area of concern for Phuket. He has ordered related agencies to continue on drug suppression efforts.