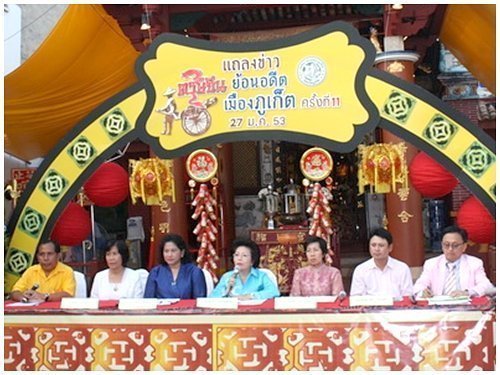 On the 27th January 2010, Miss Somjai Suwansupana, Phuket City Mayor joined hands with Mrs. Bangornrat Shinaprayoon, Director of Tourism Authority of Thailand Phuket Office, Doctor Kosol Tang-Uthai, President of Thai Peranakan Association and the Old Phuket Town Community to announce the hosting of ‘The Chinese New Year and 11th Old Phuket Town Festival’ on 19th – 21st February 2010 which will be held by them and under the scheme of reminisce the old town, culture and people along with hoping to boost the tourism business in Phuket city once again.

Entertaining activities such as ‘Phuket Baba Light Show’, street games show, foods and beverages, traditional style photographs, stamps arrangement activity and rickshaw tour around the city will be part of this fun event. Public transportation will be available for tourists and visitors. The event will be held on Thalang, Krabi and Phuket roads. Also at around 17:00 on the 2nd days of the event, beautiful parade honoring His Majesty the King and cultural parade of the Thai-Chinese will be marched in Saphan Hin, Phuket Town.