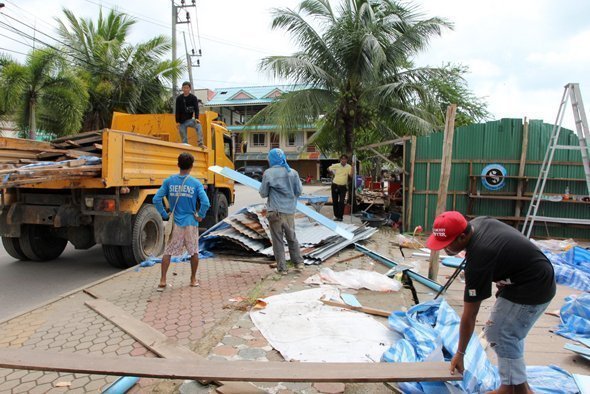 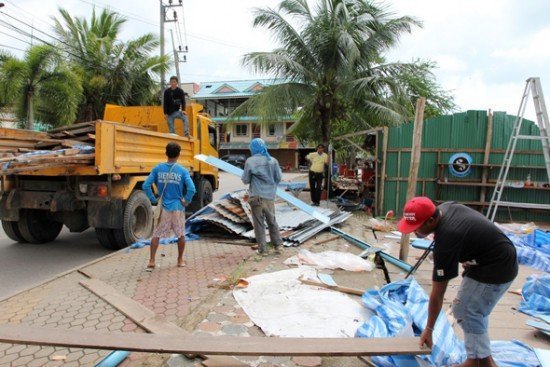 On Wednesday 16th July 2014 at Moo 6, Ao Por, Tambol Paklok, Amphur Thalang, Phuket, Mayor of Tambol Paklok – Khun Panya Sampaorat, and a team of around 100 made up of army, police and Paklok Municipality Officers gathered to assist villagers in demolishing illegal businesses which had been built and encroach the public beach. The action took place after the National Council for Peace and Order (NCPO) ordered that all Phuket beaches should be handed back to the public.

Khun Panya said “We were informed that there were a number of illegal businesses set up in the areas of Moo 6 in Ao Por, Yamu Beach and Moo 7 in Ban Para, all of which are public beaches and which no one has the right to run a business from. Moo 6 in Ao Por has been encroached more than the other areas, and 1 week ago officers had spoken to the business owners to advise them that we would be here today to demolish the said businesses. We have demolished over 30 buildings which have encroached on the beach and we still have some more to do. However, I am grateful that the locals have cooperated with us fully and understand why we are doing this.

“However, after the buildings have been demolished, the entire beach will have to be cleaned by the municipality so that locals and tourists can once again use the area as a recreational space. It is estimated that around 2,000 people pass through the area per day.”

Phuket Raceweek ready to blast off

Photo of the day : Patong Beach