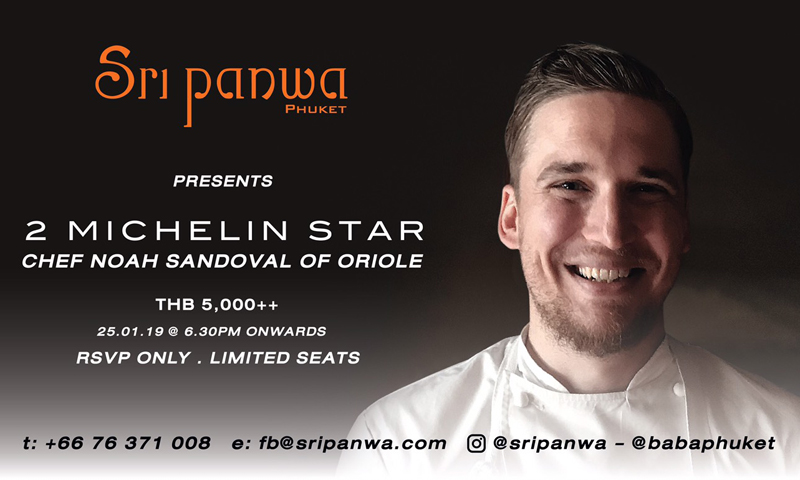 Sri panwa-Phuket, Thailand’s most coveted luxury resort, famous for its stunning panoramic ocean views pool villas, rooftop bar and its local and international culinary experience, will bring the famed Chicago’s Two-Michelin Starred Executive Chef Noah Sandoval of Oriole to showcase his Contemporary American cuisine in Phuket for the first time and for a one-day-only pop-up event on January 25th, 2019.

“Sri panwa have had the honor and privilege to host many international Michelin Starred chefs in the past 2 years from Italy to Japan and we’re so thrilled to be collaborating with Chef Noah Sandoval from Oriole, Chicago to bring the Two-Michelin Starred dining Experience from the US to our discerning guests in Phuket for the first time featuring Contemporary American cuisine at Sripanwa,” says Managing Director of Sri panwa Vorasit “Wan” Issara.

Oriole was awarded two Michelin Stars in the restaurant’s first eligible year and has retained two stars each year following. Since opening, Sandoval was recognized as a Food & Wine Best New Chef, received three semi-finalist James Beard nominations, and was named Chef of the Year by the Chicago Tribune, Oriole also earned 4-star reviews from the Chicago Tribune and Chicago magazine.
“I’m so thrilled to be in Thailand and Phuket for the first time and looking forward to showcasing some of Oriole’s signature dishes while incorporating some of the finest local ingredients like the Phuket Tiger Prawn and Thai herbs into the menu.” said Chef Noah.

Available for dinner for one day only, on January 25th, 2019, guests will witness Sandoval’s endless creativity and flawless execution. The eight-course tasting menu dinner will start at 6:30pm featuring some of the finest local and imported ingredients combined with Sandoval’s philosophy “No tricks. Just imagination, sweat, and an intimate understanding of flavor (Chicago Magazine).”