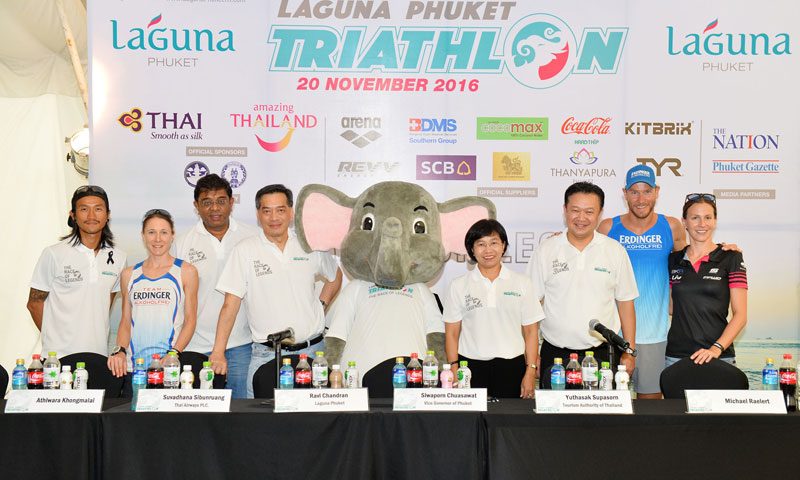 “This year, we will see around 1,100 athletes, representing more than 40 nationalities, participating in the individual and team relay categories as well as the 6K Fun Run at our race this Sunday. This is more than the previously anticipated number of 1,000 athletes. What I find inspiring is that we have seen more number of Thai athletes participating in our race each year, highlighting its growing popularity,” said Mr. Ravi Chandran.

“We have recognized the high potential in Thailand’s sport tourism segment for years now. From traditional beach holidays, new generation travel makers are keen to go on sport-related vacations where they can participate in marathon, bike, duathlon and triathlon events at various tourist locations nationwide. As Asia’s longest standing triathlon race which is organised in such beautiful setting, Laguna Phuket integrated resort is certainly one of the most desirable sport tourism destinations.”

Thailand’s number one rock star Mr. Artiwara Kongmalai, best known for his stage name “Toon Bodyslam” said “From my first marathon to triathlon races, I am impressed by this beautiful resort and its professional event organising standards. Laguna Phuket and I share similar beliefs in promoting healthy lifestyle and supporting charitable causes.”

Members of the press and the conference’s audiences were in for a treat when Laguna Phuket unveiled its official Laguna Phuket Triathlon’s mascot “Laguna.” Adorning baby elephant costume, Laguna makes his appearance at this year’s race and will be ready for photo opportunity at all time.

During the Triathlon weekend, all the pros will be staying within the Laguna Phuket resort complex to train and participate in various sport and social functions.