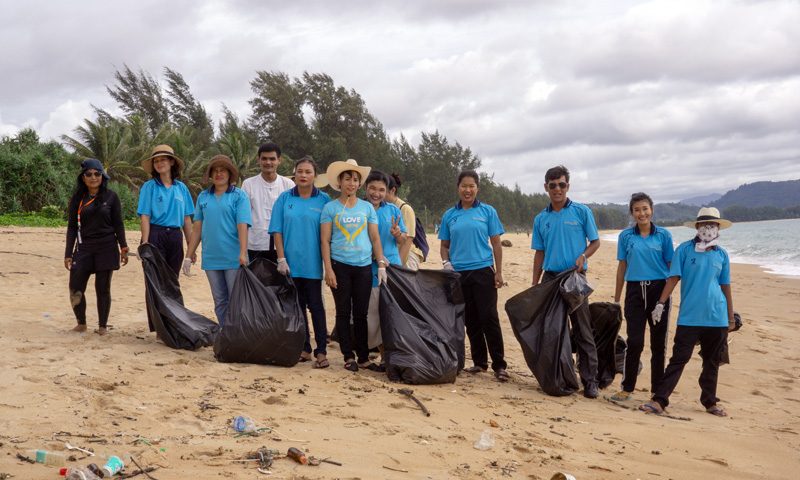 Soi Dog Foundation recently entertained its team members to a staff gathering and invited them to do a good deed by cleaning up the beautiful Mai Khao Beach and the area around the shelter on October 19. Close to 2,000 kilograms of trash were removed from the sand and jungle that surrounds the foundation.

The crowd of approximately 70 staff and volunteers from Soi Dog and other hotels in the area gathered at the beach at about 2 pm and went back to the shelter with several bags of common trash, such as cigarette butts, plastic bags, foam, bottles, and more. The activity is part of Soi Dog Goes Green campaign, which aims to care for the world through the daily routine at Soi Dog. Some key elements that have already been implemented include stop using single-use plastic bottle, reduce eating from foam box, using degradable plastic bags for dog feces, use two sides of paper and replace the lighting system with energy saving LEDs.

“We understand the importance of the environment. We are an animal welfare, non-profit organization and neither animals nor humans can live a good life without treating the environment well. Our Soi Dog Goes Green campaign is a permanent practice that will lead the Gill Dalley Sanctuary to be more environmental friendly and this beach cleaning activity is a part of it,” said John Dalley, the Co-Founder of Soi Dog Foundation.

“We don’t only collect trash from the beach but also separate the trash in different categories to be sent to the incinerator in great order.”

The trash have been collected by the Or Bor Tor and sent to the Phuket incinerator in town late afternoon of the same day.

Banyan Tree Holdings, one of the world’s leading independent,