After the Champagne Brunch, The wine Brunch, the Martini Brunch and the Brunch en Rose, Indigo Pearl launches the “Absolute Brunch” to once again add a new dimension to brunching in Phuket. The best Sunday Brunch in Phuket is back and got even better with a new concept created around vodka for an Absolute treat. Executive Chef Apadoo Pravesh and his team has even gone further in term of display and live cooking stations which will surely “keep off your feet” whilst the free flow vodka cocktails will do the rest! 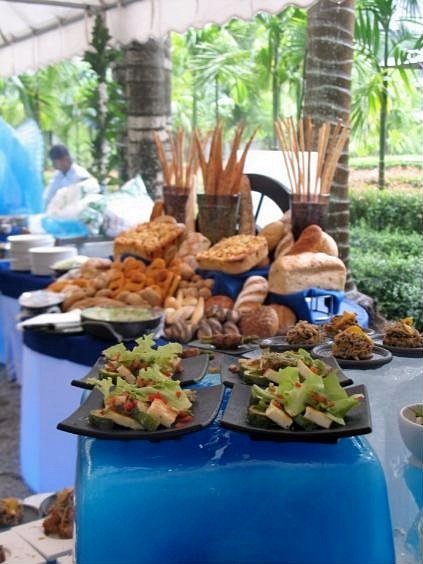 DJ Kensho has also join the party to even satisfy your sound and move appetite.

What else can be asked from an Absolute Sunday?!

The “Absolute” Sunday Brunch is priced at:

Don’t miss out the ‘Vodka On-Ice’ at Rebar 15:00-17:00hrs
All prices above are subject to applicable service charge and government tax

About Indigo Pearl:
The distinctive Indigo Pearl resort is a fusion of modern architecture and Thai tin-mining heritage next to Nai Yang Beach, just 10 minutes from Phuket International Airport.

Indigo Pearl was awarded “Gold Circle” one out of 10 best customers’ choice selected resorts in Thailand 2009 from Agoda.com

Indigo Pearl was chosen as an “Expedia Insider’s Select 2009” hotel, one of the world’s top properties in 2009

Last year it was named one of the best new hotels in the world by Condé Nast Traveler (US) in its ‘2007 Hot List’ of top new resorts, spas, restaurants and nightclubs, after only 6 months of operation.

Indigo Pearl was nominated as “Most Stylish Hotel” by ELLE magazine, Singapore, and ranked among the “TOP 50 Dream Resorts” by Honeymoon and Travel magazine.

It was also named as one of Asia’s best new hotels in a newly released book, “Tablet 10 Top Ten New Hotels: Asia & Africa”, highlighting Asia and Africa’s ten most unique and exciting new hotels. Indigo Pearl is the only hotel featured in Thailand and is one of only two beach resorts in the entire book.

Admitted as a member of HIP Hotels, the distinctive 5-star resort was furthered selected to join the Kiwi Collection’s exclusive list of the top 1,500 hotels in the world, and partner the world’s leading private members’ club and concierge, Quintessentially.

Thailand’s fastest-growing digital agency didn’t get there by chance. Their rapid growth has been fuelled…