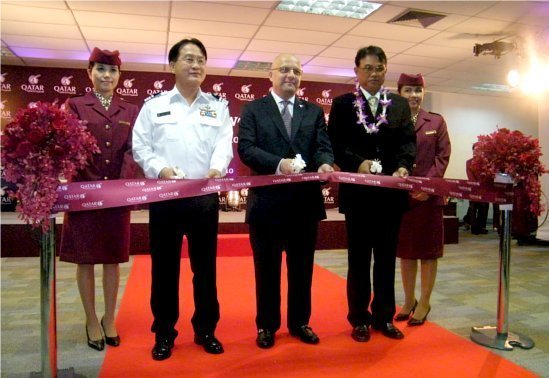 On October 12th, Mr. Marwan Koleilat, the Senior Commercial Vice President for East Asia Southwest Pacific in Qatar Airways and his staff hosted a grand opening party at the VIP room of Phuket Airport for the first flight on the Doha-Kuala Lumpur-Phuket by Qatar Airways.

This was the first time that a flight by Qatar Airways landed at Phuket International Airport. Qatar Airways was the 31st airline to open its flights to Phuket. The first Doha-Kuala Lumpur-Phuket flight used an Airbus A330-300 carrying 45 passengers, 2 captains, and 13 aircrew from Doha, KL to Phuket. The flight took 8 hours. The Airbus has 30 seats in business class and 275 economy class seats.

In October, there would be a flight every day except Monday. From November 1st 2010 to January 2011, there would be 7 flights a week. The Bangkok-Doha flight would be 3 times a day during this time as well. Therefore, there would be 28 flights from Thailand on Qatar a week. Apart from the flight to Phuket, the airline also soon launches its new routes to Hanoi, Nice, Bucharest, Budapest, and Brussels.