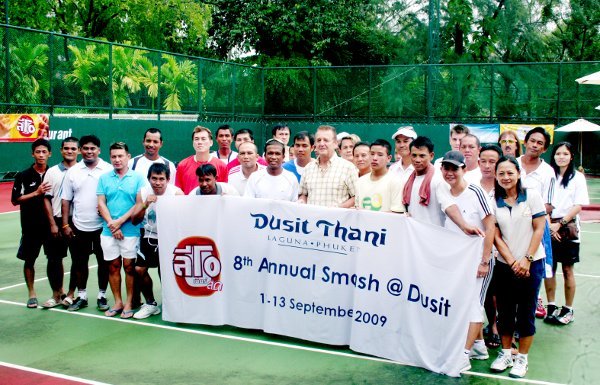 Participants were categorized into 2 leagues: Hoteliers and Open. This year’s Final round for Hotelier was fun filled with winning score of 8 : 4.  The winners is a team, coupled up from representatives from Dusit Thani Laguna Phuket and Amanpuri, Saran Somwongsa and Jeerapong Amornmasdis respectively. The 1st runner up are both from Outtrigger – Paipan Riyapan and Panumas Theptong.

‘Open League’ was finished with the score 8 : 6. Nikorn Intaramunee, a Tennis trainer and Somchai Rattanapan, ex-staff from Dusit Thani Laguna Phuket enjoyed their winning over the team from Phang Nga – Somsak Samart (last year 1st Runner up) and Sirowan Jittakarn.

The charity tennis opens to men and women of all ages, inviting all tennis instructors and staff of Laguna Hotels and Other Hotels in Phuket to participate. Almost 80 Tennis players from all over the place join the competition. This is more or less like an annual reunion. Everyone knows each other as it is a friendly promising to come back every year.

Part of proceeds from the tournament will be donated to Handicap Children School in Pakok to use for needed items such as rice, cooking oil, and cleaning supplies. So not only fun and healthy but also return something to the beloved community.