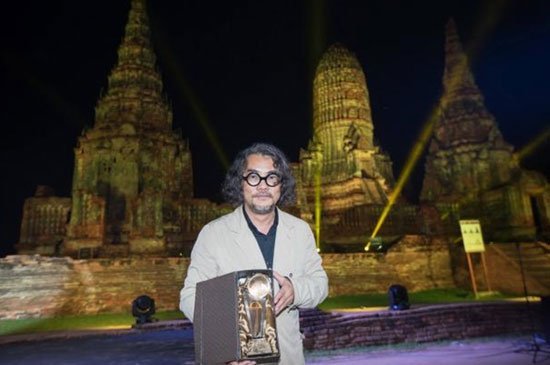 ACCLAIMED Thai architect Duangrit Bunnag has won the acclaimed Asia’s Best Building of the Year prize at the Arcasia Awards for his design of The Naka Phuket resort.

Organized as part of the 36th Arcasia Council Meeting and Forum, the award presentation ceremony was held on Saturday night on the grounds of Wat Chaiwatthanaram in Ayutthaya.

“I am very glad to have won both a gold [medal] and Best Building of the Year. I feel honoured and proud of the awards,” he said.

“This is the first time I’ve won Asia’s Best Building of the Year, which is considered the overall winner at the Arcasia Awards. I won two gold [medals] on two separate occasions a few years ago.

“Members of the jury showed good judgement. This is essentially the best award of the region in architecture.”
The architect’s design of The Naka Phuket also won gold in the Resort Building category.

The Best Building of the Year is the most important prize at the awards night.

The design of The Naka Phuket was inspired by the surrounds – a steep mountainside that extends down to a valley-enclosed beach.

The 94 “hanging villas” form the slope, with floating bedrooms the key visual concept of the project. Each unit is separate with a good ocean view.

Construction of the elaborate villa on the tight, sloping hill required high integrity in design and workmanship.

“The challenge lay in how to build a resort on the given site. I intended to design the rooms to look like they actually stick out from the hillside and overlook the sea. When you stay in the room, it feels like you’re sleeping in mid air. It gives you a sense of tranquility and excitement at the same time,” said Duangrit.

The Arcasia Awards is Asia’s most prestigious architecture accolade and acknowledges exemplary work by architects in the region.

It encourages sustenance of the Asia spirit, development and improvement of the Asian building environment and the enhancement of an awareness of the role of architecture and architects in the socio-economic and cultural life of Asian countries.