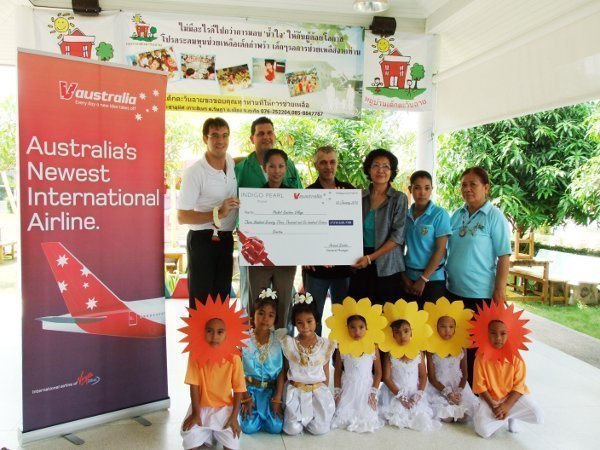 Indigo Pearl Phuket and the Virgin Blue Group of Airlines have teamed up during the inaugural flights of V.Australia and Pacific Blue (international airlines of Virgin Blue) now flying direct from Perth, Brisbane and Melbourne each week to Phuket International Airport. During each of the inaugural flights from the various cities Indigo Pearl Phuket has given a complimentary week stay in one of their suites and V.Australia two business class tickets. The package flight and accommodation was then auction during each flight.

The three auctions raised a total of Baht 373,616 which Baht which has been presented to Member B.O.D. Phuket Sunshine Village Foundation on 22 January at 11:00am by Arnaud Girodon, General Manager of Indigo Pearl and Nittaya Phetam, Representative of V Australia.

We are delighted to have the support of V.Australia and these auctions have raised much needed funds for the children who were affected by the Tsunami in the southern provinces of Thailand,” said Arnaud Girodon.