Khun Praew: My top 10 things to do on Phuket Island 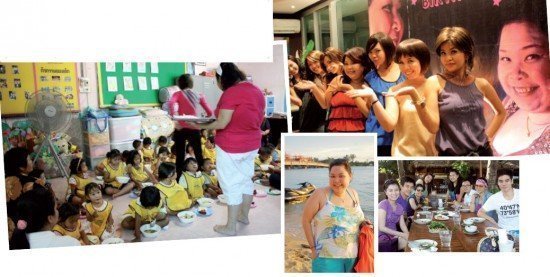 I used to be a lazy girl who never participated in sports. One day, one of my best friends persuaded me to try Muay Thai. One Sunday, evening during July last year, I went to Boat Lagoon Fitness with him to try it out and found it really excited me! Muay Thai not only makes me stronger and healthier but also motivates a chubby girl like me to be more active. Since then, I have been doing Muay Thai twice a week, at Boat Lagoon Fitness, with my personal trainer, Khun Pae, who has been doing Muay Thai since he was a little child. I love it!

2. Hosting lunches and making donations for those who need help

My friends and I often go to host lunches and donate useful items for the residents of Phuket Sunshine Village, Baan Lung Pitak and Paklok Social Welfare Development Center.

There are so many homeless children and elderly people in Phuket. We usually visit institutions that support the less fortunate every 2-3 months. Last year I posted on my Facebook page that I wanted to raise money for Baan Lung Pitak, a place that looked after over 50 children during the day time. I felt very bad for the children because they did not receive enough support and care from their parents, due to circumstances such as imprisonment or working far away.

I managed to raise more than 20,000 THB from friends and relatives. The proceeds were used to buy pillows, towels, bed sheets, electric fans, books, toys, baby milk powder and other basic necessities for them. It was exhilarating to learn that people still care for others despite their hectic schedules, which may have had made them nonchalant to what’s going on around them.

My girlfriends and I enjoy coming up with ideas for theme parties for our friend’s birthdays or other special occasions. Just the planning is fun by itself!

For example, we came up with a theme of “Wig and White” for my birthday in 2009. All the girls were required to wear wigs, while the guys had to wear white outfi ts. We started our night at the Point Bristol. It was very funny as other diners in the restaurant gave us very strange looks!

During the dinner, one of my friends asked me how I felt about my larger-than-life photo. Initially, I didn’t know what she was talking about, as I had not noticed anything unusual in the restaurant. When I turned myself around, OMG, I saw a big billboard photo of myself hanging on the wall. I was so shocked, but the billboard photo was very impressive.

Later, we moved on to Kor Tor Mor to continue with the celebration. My friends had prepared special birthday cup cakes and a crown made from sugaricing with my name on it. It was the most beautiful birthday cake I’ve ever received. Then, the last surprise was that three of my special friends from Bangkok had flown all the way down to Phuket just to say Happy Birthday and to give me a bouquet of flowers. I couldn’t hold my tears as I was overwhelmed with joy. It was one of the most unforgettable birthday parties I’ve ever had, and I was really grateful that I have a group of friends who really care for me.

Other activities that I enjoy to do in Phuket are usually simple. I do not need anything sophisticated, as long as I get to spend time with the people I love: just to say Happy Birthday and give me a bouquet of flowers. I couldn’t hold my tears any longer. I cried a lot but it was tears of happiness. It is one of most unforgettable birthday parties I have ever had. 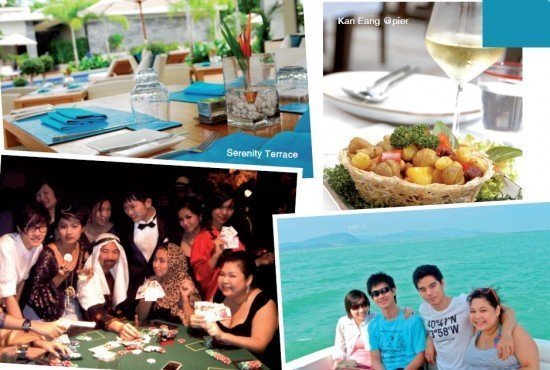 5. Eating at Kan Eang @pier, our favorite restaurant in Phuket

7. BBQ’s with a group of close friends

9. Island hopping for the day, with friends 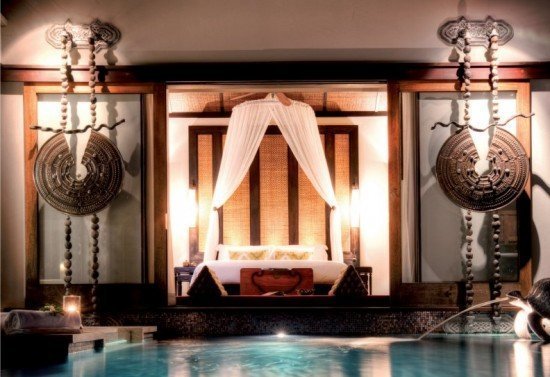 First of all, would you give us a little background information about yourself!

Would you like to tell us a little about yourself?

I am originally from New Zealand and have been working

Originally from Spain, 42 year old Esmeralda is the proprietor of The Dream Gallery. The Dream Gallery, which opened in September, already houses a vast collection of Chinese antiques and artefacts. There are pieces of hand embroidered dress material, hand painted porcelain, traditional Chinese tea sets, framed antique advertising posters; hand carved wooden furniture and ornate Chinese wooden lanterns. Most of the artefacts were hand made for wealthy families, with some pieces dating back hundreds of years. However, also on display are items of jewellery which are designed by Esmeralda and hand made by her team based in Beijing China.

Esmeralda’s fascination with Chinese artifacts began about 14 years ago when she moved to Beijing. In 1996 she was in charge of establishing foreign companies within China. She worked for many years as high advisor for the Chinese market and helped foreign companies to enter the market. In 2003 she set up her own company. She then started to be involved in exporting goods from China to various places worldwide.

It was during this time in China she collected her vast range of furniture, paintings, pottery and various ornamental pieces. Nowadays she still works advising foreign companies in China but she is spending more time in the design field. 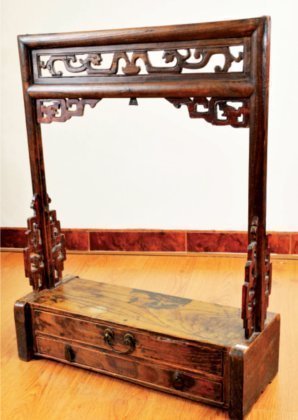 “He showed me a footprint in a rock”

The story of how Esmeralda came to be in Phuket is a very interesting one. She advises us she was led by Buddha to Phuket. “I saw Buddha in a dream back in January 2007. He was dressed in gold and told me I would soon be moving to a new country” she said. “He showed me a footprint in a rock, this rock was underwater. He also showed me an island.”

“I had visited Thailand for holidays previously but never Phuket. However, in May 2007 I booked to come
here. When I arrived at my hotel, I was unpacking and a map of Phuket fell out. Strangely, Phuket was the shape of the island from my dream. During my holiday here I asked various people if they knew anything about this mysterious underwater footprint, but nobody could help me. Then close to the end of my holiday, when out, I ran into an old lady. I asked her if she knew of the footprint in the rock.”

“I told her about my dream”

“She was shocked and wanted to know how I knew about this because it was located in a small island and only devout Thai Buddhists knew about it. When I told her about my dream, she was happy to show me how to get to this island.”

Esmeralda paid a local fisherman to take her to this island. It is located about 30 minutes away from Cape Promthep. “The island is inhabited by a group of monks and the head monk took me to the sacred rock. He advised me that Buddha had come to the island 2500 years ago and left his footprint there.” It seemed natural that Esmeralda should bring her collection here to Phuket and open her Chinese antique shop. Because all of this came to her in an incredible dream, she decided to name the business The Dream. One aim of Esmeralda’s, and The Dream Galleries, is to help the Temple in Kho Kaew Pisadarn Island (Buddha Island) to finish building their pagoda.

The pagoda was destroyed by a strong storm just before the Tsunami and the monk that takes care of the island is trying to rebuild it. So she hopes, with the gallery’s help, to finish this project.

Since last year, the island has become very popular with tourists and is now becoming known as Buddha Island. It can be seen from Rawai beach and there are many boats that can take you there.

Esmeralda plans to return to China every 6 weeks or so to purchase new stock for her new business. We wish her every success with her new venture.

The Dream Gallery, Viset Road, Rawai (opposite Vijit Resort) is open Tuesday to Sunday from 10a.m to 7.30p.m.

Escape to the magical faraway world of Palazzo Phuket 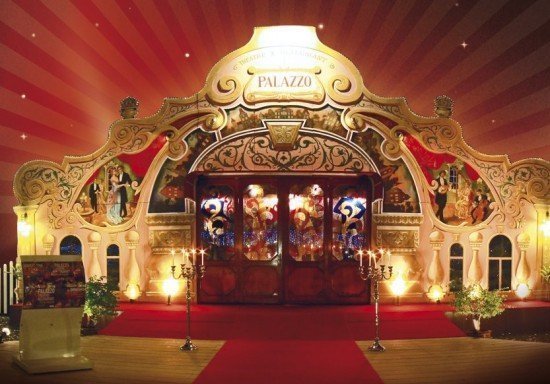 Would you like to get away from your daily routine? Forget about the monotony of everyday life and enjoy an evening of unique experiences? Escape to the magical faraway world of Palazzo

“WE LIKE TO GET TO KNOW THE GUESTS MORE PERSONALLY”

Could you please introduce yourself?

The restaurant found its beginnings as a grocery store opened by Mr. Chamnan Pachantabutr, affectionately known as Khun Daeng, approximately 40 years ago. He was and still is close to the local fishermen

My personal experience of Palazzo Phuket –Theatre and Restaurant 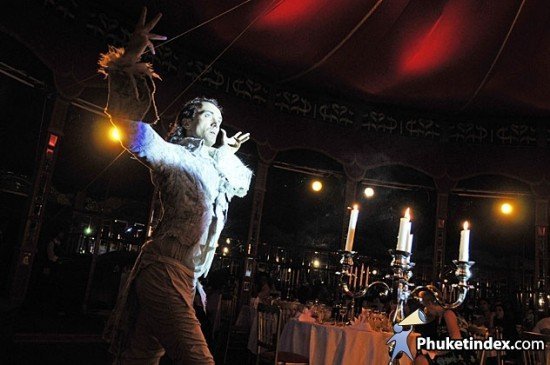 It’s Saturday evening and the time had finally arrived for me to attend possibly my most unusual/unique dining experience since arriving here in Phuket. I have dined at many restaurants here