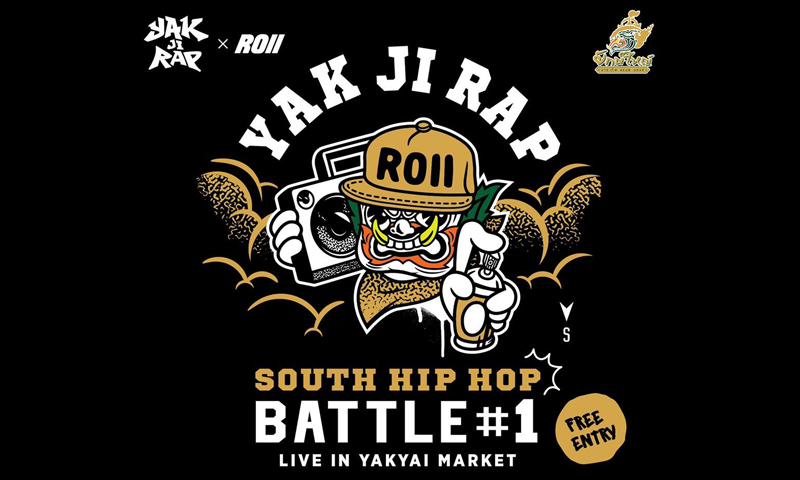 The South Side Phuket Hip Hop group, better known in Thailand with the name “South Side”, has been working with one of the top Hip Hop label in Thailand, Thaitanium Entertainment, for over a decade. After years of working in the music industry, the band has formed ‘ROII’, an event organizer in Phuket specializing in Hip Hop parties and MC battle competitions. This year, Roii has teamed up to set a series of Hip Hop competitions at the Yak Yai Market, creating the “Yak Ji Rap Festival” (meaning “I wanna rap”) these three coming Saturdays, starting on the 19th and the 26th of October, with a final event on the November 2. The competition features MC rap battles, graffiti battles and B-boy, with a main concert ending the event. 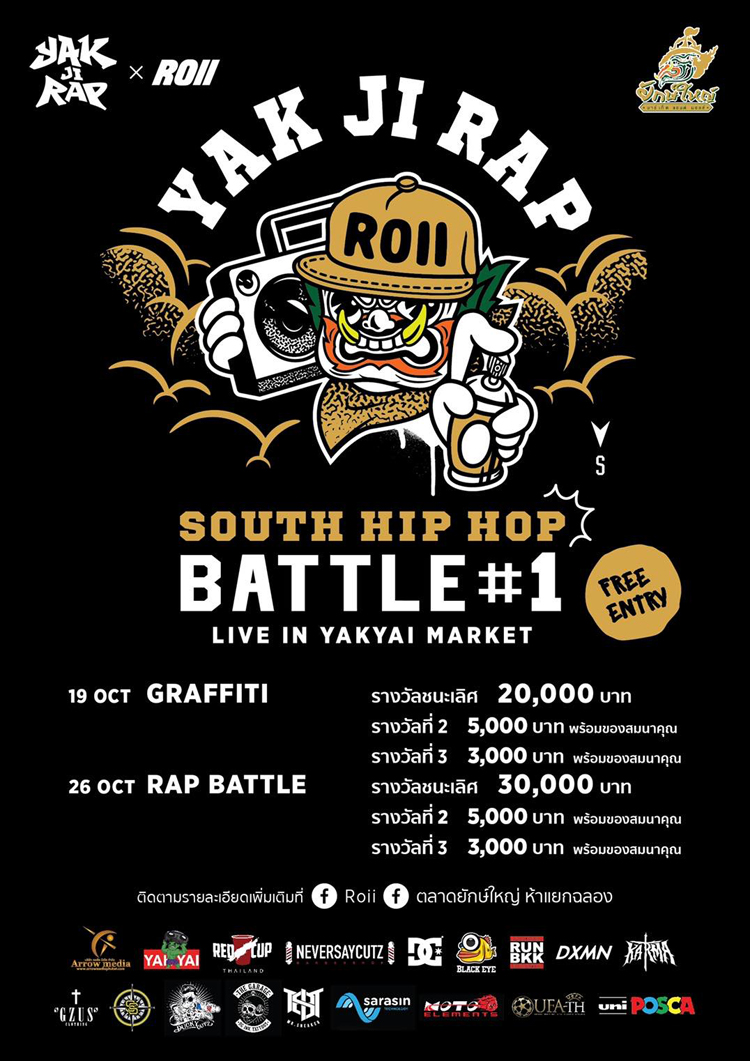 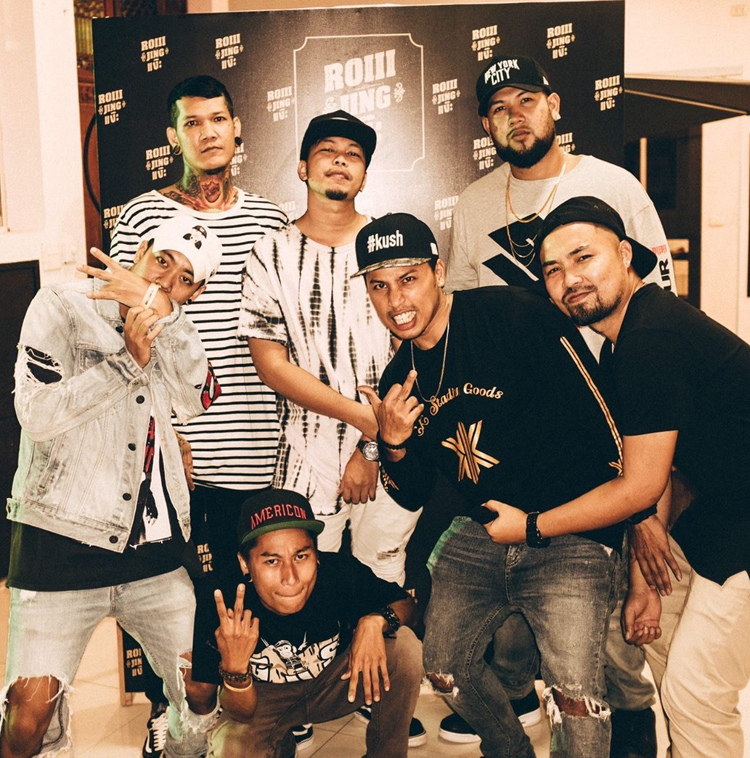 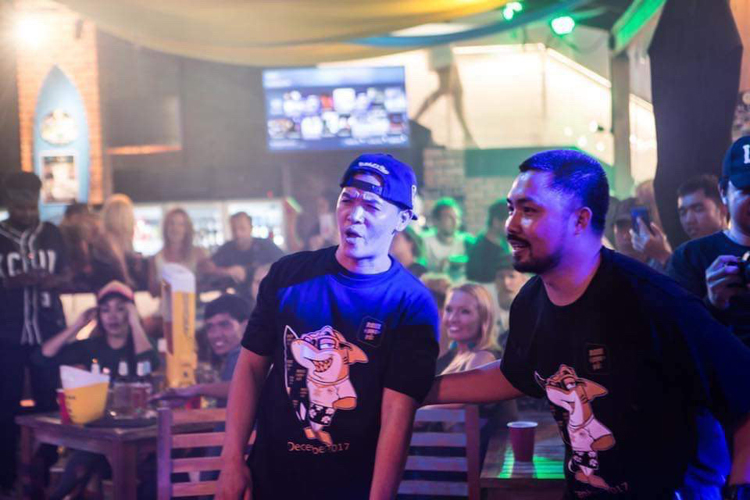 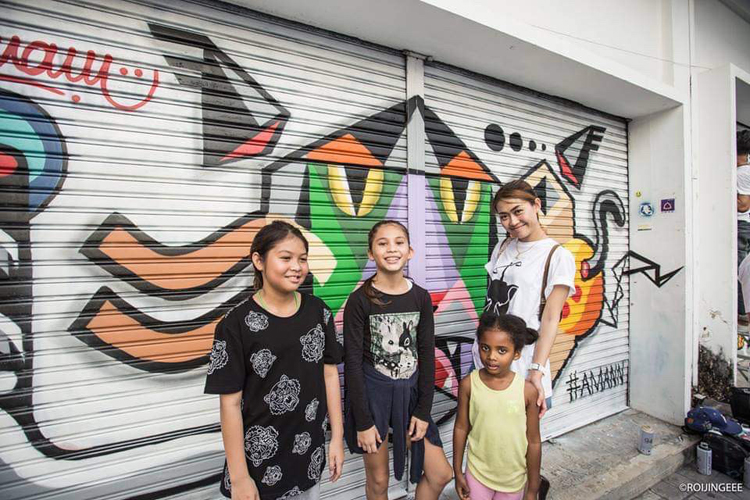 On October 19, from 3:00 pm onwards, at the Yak Yai Market near Chalong Circle, there will be a graffiti competition with artists participating from around the southern hemisphere with Yak, or Thai giant, as the main theme. The contestants will be showcasing their graffiti skills live at the event, creating a beautiful piece of street art, while passersby are welcomed to participate as well. The judges are famous graffiti artists from both Phuket and abroad, such as Brazil and the USA. Also, there will be some well-known artists from Bangkok and Chiang Mai who’ll make their graffiti show. People who love street art are invited to join the event and color up the fair.

At about 6:00 pm, there will be a fun BBQ party with games, followed by a B-boy show at 10:00 pm, when the ROII team will announce the winners of the graffiti competition. The top three winners of this competition will receive cash prizes including THB 3,000 for 3rd place, THB 5,000 for 2nd place and THB 20,000 for the winner, as well as other merchandises from the sponsors.

During the event, there will be shops selling various items from South Side Wear, a clothing brand under South Side, Never Say Cutz and other well-known Thai and international streetwear brand as well as a swap meet street market, making this event a true street lifestyle gathering. Twopee’s album – South Side Ambassador, the newest and hottest Rap album from the South Side family and distributed by Thaitanium Entertainment, will be sold at the event. Event goers can enjoy several fun games at the booths to win prizes from sponsors, such as DC Shoes and other street wear brands.

The following week, on October 26, at 7:00 pm, there will be the MC Rap battle at the same location. The contestants have been selected through their audition videos sent to ROII group on Facebook and evaluated by experienced rappers. There will also be famous rappers performing at the event, such as Micksickflow from “The Rapper”, Mc Big Won from Bangkok Invaders and South Side Phuket with DJ RPG-1 on the turntable. Similar to the first Saturday, cool items will be available at the booths as well as games and entertainment. The announcement will be done right after the battle.

On November 2, there will be the main big Hip Hop concert from OG-ANIC LAZYLOXY HIGHHOT from Thai TV Show “The Rapper”, starting from 10:00 pm onwards.

This is truly one of the biggest Hip Hop event in Phuket with every element of Hip Hop in one place! Yak Ji Rap Festival is for those who are passionate with street culture. The event can be enjoyed every Saturday until November 2, 2019.