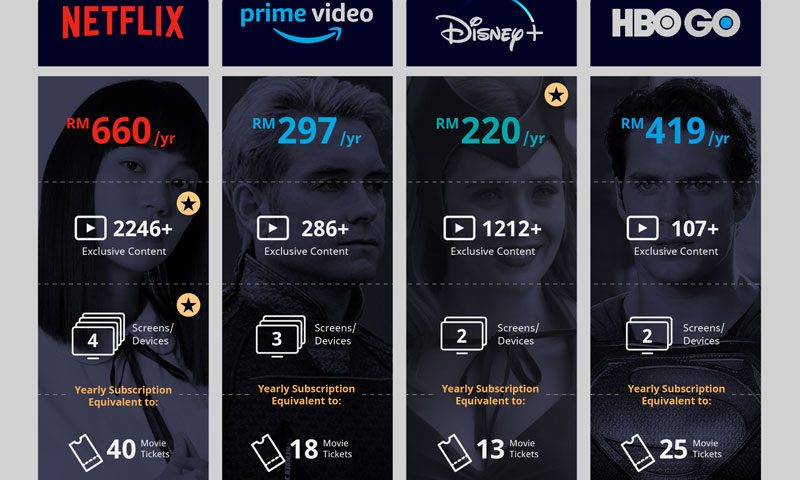 Work from home has become such a norm during the pandemic’s sophomore year. According to BBC News, TV-watching and online streaming significantly surged during the lockdowns.

Luckily, Malaysia has an additional streaming service that will soon be available. Disney and Marvel fans are in for a treat as Disney+ Hotstar announced that they will launch this in Malaysia on June 1, 2021. Long story short, there’s another highly anticipated alternative streaming platform for Malaysians during this boring MCO 3.0.

In conjunction to this, iPrice Group gathered the existing streaming platforms in Malaysia, such as Netflix, HBO Go, and Amazon Prime Video, to determine which offers the best price and amount of exclusive content available. This study aims to be a guide for online shoppers to make the best decision and spend more wisely. The prices indicated are obtained from the official websites.

Which Platform Offers the Most Exciting Deals?

With the most titles and catalogues, Netflix premium yearly subscription costs RM660 with 4 screens you can watch in simultaneously. It seems like this is the most expensive deal. According to iPrice’s research, this amount is equivalent to cups of 77 boba milk tea.

Consequently, if consumers stop drinking these sugary drinks today (yay or nay?), they can enjoy the largest exclusive catalogues, which has 2246+ videos while being able to share their account with closest friends and family members under the same roof. Moreover, Netflix offers varying prices, starting from as low as RM17 (mobile only), to RM33 (Basic). Other offers include Standard (RM42) & Premium (RM55) monthly subscriptions.

On the other hand, with plenty of films and TV series episodes, Disney+ Hotstar offers the lowest subscription price on the list. This is an affordable alternative of a trip to the cinemas as the price of this subscription is equivalent to 13 movie tickets.

Disney+ Hotstar’sRM54.90/quarterly or RM220/yearly subscription allows consumers to watch their iconic Disney, Marvel, Pixar, National Geographic movies. It offers more than 18,800 films and episodes. Therefore, if consumers save up all the movie tickets spending on GSC for one year, they may enjoy years’ worth of streaming videos on the couch with their beloved families. Or giving up 26 cups of boba can allow them to enjoy Disney+ Hotstar too.

At the same time, it’s important to note that each registered Disney+ Hotstar account can support two concurrent streams. However, users can only watch one Multiplex movie on only 1 device at a time. Hence, if a user started watching a certain Multiplex movie on his or her laptop, he or she can’t continue watching this movie in another device.

Last but not least, Amazon Prime is the only entertainment platform derived from e-commerce. This has many advantages. Subscribing to Amazon Prime enables the streaming feature and the privilege of priority delivery when shopping in Amazon.

Subscribing to Amazon Prime is the same amount as 59 packs of curry-flavoured Maggi. By paying the subscription fee, you can enjoy 286 exclusive videos and stream on up to 3 different devices at the same time. It is worth getting access to your favourite original series such as The Boys, The Marvelous Mrs. Maisel, and many more if you sacrifice drinking 35 cups of boba.

Research Methodology:
For a fair comparison, this study only includes top movie and TV streaming sites/apps that require a subscription on all devices. The list of top streaming apps in Malaysia was taken from App Annie’s top grossing chart. The number of contents were scraped from title lists of Netflix, HBO Go, Amazon Prime Video and Disney+ respectively. The price comparisons to movie tickets, boba, and Maggi were based on GSC, Tealive, and Maggi.

Why did we choose GSC?
With the amount of 356 screens countrywide, GSC is the largest cinema chain in Malaysia.

Why did we choose Tealive?
Tealive is the signature bubble tea brand in Malaysia, with over 150 outlets.

Why did we choose Maggi?
Maggi curry (77gx5) was specifically chosen for this study because it is the most common and measurable price. The price was obtained from iPrice.my.

Laguna Phuket Leads as The First Integrated Destination in Thailand

Data Processing Technology Allows You to Outsource the Service